Starting with the chaotic assault on White House protesters, President Donald Trump and his military deputies have spent the past several weeks threatening an outsized military response against anti-fascists, protesters and other groups he perceives as his enemies.

And on Thursday, the administration turned those military efforts back to a favorite bogeyman: undocumented immigrants at the U.S.-Mexico border. The Pentagon announced it would re-up its military presence by deploying 4,000 troops to the border, mostly drawn from the National Guard, in October.

Unauthorized immigration is down substantially this year. But there is an election coming.

The Pentagon said it was extending troops at the border at the Department of Homeland Security’s request, at a level of 4,000 service members — down from the currently authorized 5,500. It’s still a relatively high figure, especially compared to the low level of border-crossings.

The news that troops will continue to be present at the border underscores the disturbing readiness with which the Trump administration has been using the military as the president’s political muscle, particularly in response to recent protests against racism and police brutality against Black people.

I am deeply worried that as they execute their orders, the members of our military will be co-opted for political purposes. Mike Mullen, former chair of the Joint Chiefs of Staff

“These people are ANARCHISTS,” Trump tweeted on May 31 as rowdy protests broke out across from the White House. “Call in our National Guard NOW.” One night later, the D.C. National Guard sprayed peaceful protesters in Lafayette Square with tear gas and rubber bullets and buzzed them with a helicopter — a crowd-dispersal tactic more commonly used in war zones — to clear the way for a photo-op of Trump and his top military deputies.

A swift and furious backlash followed over the fact that representatives of the armed forces were present at all. Unleashing the military on ordinary citizens “erodes the moral ground” of the military, Jim Mattis, Trump’s former defense secretary, wrote in the aftermath.

“It sickened me,” said Mike Mullen, the former chair of the Joint Chiefs of Staff. “I am deeply worried that as they execute their orders, the members of our military will be co-opted for political purposes.”

The outrage ran so deep that Gen. Mark Milley, the country’s top military official, issued an extraordinary apology for joining the president’s entourage that day. “My presence in that moment and in that environment created a perception of the military involved in domestic politics,” Milley said in a videotaped statement. “I should not have been there.”

But the administration has not flinched at the prospect of armed forces engaging in yet more domestic clashes.

The same day as the chaos in Lafayette Park, Defense Secretary Mark Esper encouraged governors to “dominate the battlespace,” meaning the protests roiling thousands of American cities. Military officials later revealed that the whole Lafayette Park debacle was their desperate attempt to keep Trump from taking an even more extraordinary measure and ordering nearby active-duty combat troops into the D.C. city limits. Such a step would involve Trump invoking the 1807 Insurrection Act.

“If states don’t take necessary action, I will deploy the United States military and quickly solve the problem for them,” Trump said on June 1.

The military eventually recalled most of the 1,600 active-duty service members staged outside the D.C. area.

But earlier this week, the Army mobilized 400 unarmed members of the D.C. National Guard to support National Park Police who are guarding national monuments around the nation’s capital. Anti-racism protesters have made moves to topple statues and monuments around the city. The Park Police refuse to explain where they require extra support, raising the prospect that the troops are being activated to make a point: On Tuesday, the president threatened protesters trying to occupy Lafayette Square with “serious force.” 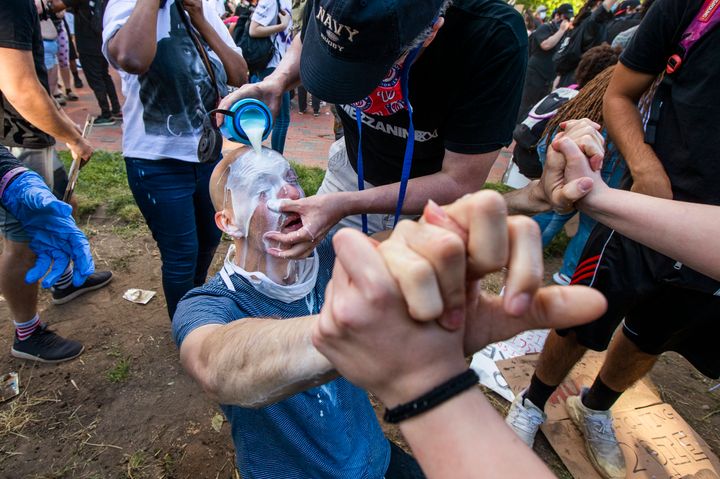 AP Photo/Manuel Balce Ceneta Milk is poured into a demonstrator’s eyes to neutralize the effect of pepper spray during a rally at Lafayette Park near the White House on May 31, 2020.

The news of additional military personnel at the border recalls Trump’s posturing during the 2018 midterm elections. As Republicans faced electoral losses, Trump deployed 5,000 active-duty troops to the U.S.-Mexico border to gin up fears that caravans of Central American migrants would storm into the United States.

Border apprehensions and immigration processing are civil law enforcement activities, meaning they don’t require the military, with all its lethal training, in theory or in practice. The caravans never posed a violent threat and the troops found themselves idle — driving support vehicles and painting sections of the border fence.

At the time, a group of House Democrats hailing from border states criticized Trump for using the military on a political mission.

“It’s never been very clear what exactly they’re doing and why they’re needed,” Lapan said. Today, he added, with border crossings at their lowest point in years, the administration doesn’t even have a pretense for the troops being present. “What’s the argument for doing this now? It points to it being a purely political reason.”