BRONX, N.Y. — Last Friday a few dozen protesters gathered at a busy intersection near the northern tip of New York City for “A People’s Tour of the Real Looters of the Bronx.” There were more cops than attendees, with scores of uniformed police officers stationed on the street corners, watching over this group of mostly young and civically engaged New Yorkers — among them students, teachers, artists and social workers — as if they posed an imminent threat.

The activists held a banner reading “Abolition, Decolonization, Liberation” and took turns delivering speeches through a megaphone, struggling to get their message heard over the roar of nearby traffic and the hum of a New York Police Department helicopter circling overhead.

One activist — wearing braces around her wrists because she said cops had zip-tied her so tight during another recent protest that her hands turned blue — approached me and inspected my press pass. “OK,” she said, “just checking because we don’t allow the New York Post in the Bronx.”

Over a week prior, the New York Post and other media outlets had painted a grim portrait of the borough. “Bronx streets turn chaotic as looters run wild,” screamed one Post headline. “Fires, mayhem in the Bronx,” said the Daily News. “Looters run wild in Bronx,” Fox News declared.

All the articles were brief summaries of a June 1 uprising near this busy intersection of Fordham Road and Grand Concourse, part of the weekslong national demonstrations against police killing Black Americans. The June 1 protest included people, many of them young, starting fires in the streets and taking things from stores.

But the dedicated activists at the June 12 demonstration were here to tell a much different story — a story about what they say is the real looting going on in the Bronx, and in so many other places across America that Black and brown people call home. The activists were here, they said, to defend their neighbors from racist narratives crafted by multimillion-dollar media companies.

The American press has a long history of fear-mongering about Black and brown people “rioting” and “looting,” a tactic that academics and activists say is meant to obscure the routine and systemic state-sanctioned violence deployed against marginalized communities. In this current, historic period of mass unrest, which has seen protests against police violence in hundreds of American cities, activists like the ones in the Bronx are working hard to flip that tired media script.

“We want to reclaim the message about who is really looting the Bronx,” said Mustafa Sullivan, a member of FIERCE, an advocacy group for queer New Yorkers of color, which organized last Friday’s protest. “What are the conditions behind everything that has happened?”

Sullivan’s fellow demonstrators passed out flyers to passersby listing the institutions they say have plundered the Bronx over the decades, making it one of the poorest regions in the U.S. The real looters, the flyers said, “are landlords that overcharge for apartments and never make repairs” and the “elected officials that take money from developers and police unions.”

The real looters “are not angry Black people in our communities stealing TVs, setting fires, and portraying a stereotype we know too well,” the flyers argued, but rather the banks, slumlords, private hospitals and corporations that own the majority of properties in the Bronx.

‘None Of These Businesses Here Belong To Us’

Christopher Mathias/HuffPost A demonstrator in the Bronx’s Fordham neighborhood makes the case against the New York borough’s true despoilers during “A People’s Tour of the Real Looters of the Bronx” on June 12, 2020.

The demonstrators started to march on the sidewalk along Fordham Road. They passed a CityMD urgent care clinic, where Bronxites in masks stood in a line stretching down the whole block, waiting for a COVID-19 test.

The coronavirus pandemic has hit the Bronx, where 90% of residents are people of color, particularly hard, exacerbating the stark inequities here.

The borough has the city’s highest rate of COVID-19 hospitalizations and deaths, due in part to the high concentration of “essential workers” — grocery store cashiers, nurses, bus drivers, food delivery drivers — who live here and, by the nature of their lower-paying jobs, have more exposure to the virus.

Food is a problem too. At least 50% of the Bronx’s emergency food banks were closed earlier this month amid the pandemic, making fresh meals even more scarce in a place with vast food deserts, which already aggravated the high rates of diabetes and high blood pressure in the borough.

The prevalence of such health conditions here — including asthma, due in part to pollution from industrial facilities like the huge trucking operations of Fresh Direct — have made Bronxites more vulnerable to severe or fatal complications if they’re infected with the coronavirus.

Meanwhile, America’s overwhelmingly white billionaires — who have earned their wealth off the backs of working-class people like those in the Bronx — have seen their fortunes rise by $434 billion during the pandemic. 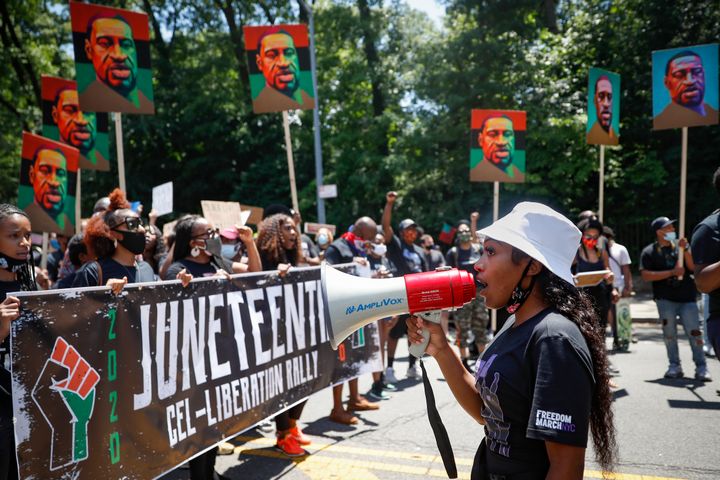 John Minchillo/ASSOCIATED PRESS Protesters chant and march after a Juneteenth rally at the Brooklyn Museum in that New York City borough on June 19.

The demonstrators stopped outside an Old Navy store on Fordham Road.

An activist with the group Take Back the Bronx stood outside the chain store, its windows covered with plywood, and held up a megaphone. She reminded her fellow demonstrators of when Bronxites took items from shops during the blackout of 1977.

“We should be enraged that in 2020, our children still feel like that’s the best way to get it all,” said the activist, who declined to give her name. “That the conditions have not changed in 43 years, that that is the way we express our rage.”

She noted that the vast majority of the businesses in this part of the Bronx are owned by corporations, including the Old Navy behind her.

“These businesses have insurance,” she said, adding: “They’ll be back to sell you a fucking stretch jean sewn by Bangladeshi women for pennies on the dollar.”

They marched by people waiting in another long line, this time outside a Bank of America location. BOA was among the large financial institutions that caused the 2008 financial crisis, which disproportionately diminished the wealth of Black people.

They marched past a man offering a rare opportunity during the pandemic: a new job. “$18 an hour,” he yelled, “no experience necessary!” (Unemployment claims in the Bronx skyrocketed by 2,000% in May. Now thousands of residents here can’t afford to pay rent and are bracing themselves for the end of the governor’s moratorium on evictions this coming Saturday.)

And the activists marched past men selling T-shirts emblazoned with an illustration of George Floyd, the Black man killed by police in Minneapolis last month, which kicked off weeks of demonstrations against police brutality across the country.

‘A Late Act In A Long Drama’

Media critics, primarily Black and brown journalists and activists, have long argued that this kind of coverage, in essence, misses the forest fire for a few burning trees.

“The press largely failed to frame the protests — including vandalism and fires — as a late act in a long drama,” the Columbia Journalism Review noted in an article earlier this month. “These actions came in response not just to the deaths of Floyd, [Breonna] Taylor, [Ahmaud] Arbery, and [Tony] McDade, but to the never-ending list of Black people killed by police over many decades.”

Raven Rakia, a New York-based journalist and writer, authored the widely read 2013 article “Black Riot” in The New Inquiry, which offered an unflinching look at how the predominantly white American media covers protests led by Black people. The media’s fixation on “riots” and “looting,” she told HuffPost this week, often obscures the systemic violence regularly visited upon Black Americans.

“There is very little investigation in mainstream media into the oppression and exploitation that is a constant presence in Black working-class people’s lives in this country,” Rakia said.

And yet the media, she continued, will then depict uprisings against that oppression and exploitation as the real “chaos, anger and violence,” as if it “sprung out of nowhere.”

“They treat Black-led uprisings as a nuisance and are relieved to go back to their daily routine,” Rakia said. 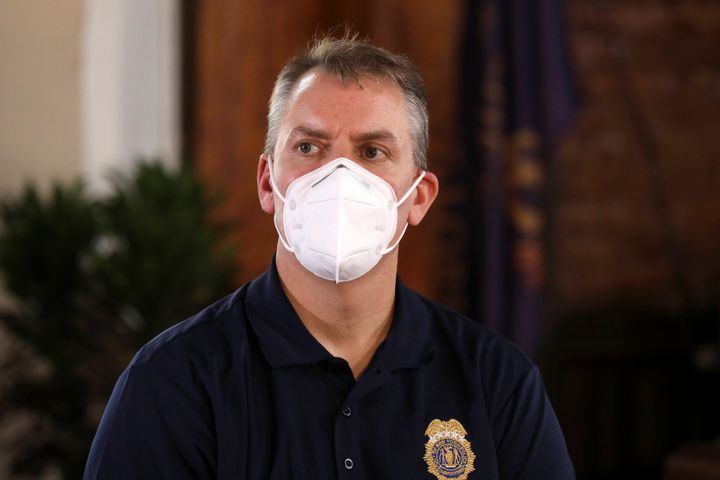 Caitlin Ochs/Reuters New York City’s police commissioner, Dermot Shea, dismissed the connection between the peaceful and violent aspects of the Bronx uprising in early June. “This wasn’t again about protests,” he said, “this was about tearing down society.”

Earlier this month, NYPD Commissioner Dermot Shea described those participating in the Bronx uprising as solely wanting to “cause mayhem.”

“This wasn’t again about protests,” Shea said, “this was about tearing down society.”

His comments were published in outlets like the New York Post with no rebuttal from the protesters themselves.

“The media still assumes people ‘looting’ from stores are ‘apolitical,’ greedy or opportunists instead of interrogating it as a protest against capitalism and exploitation,” Rakia said.

Framing it in this way, she explained, allows the press “to keep their analysis of the uprisings on a surface level” — focusing only on George Floyd’s death, for example — instead of examining the demonstrations as “uprisings against racial capitalism and the violent police state that enforces it.”

Sullivan, the FIERCE activist who helped organize the June 12 protest in the Bronx, said such media portrayals of young Black New Yorkers also make them vulnerable to police brutality. “Our young people are being set up as being violent and supporting violence,” he said, referring to accounts of the unrest on June 1.

And that, Sullivan argued, helped the NYPD to justify trapping, pepper-spraying, brutalizing and ultimately arresting some 250 people en masse in the South Bronx a few days later, on June 4. 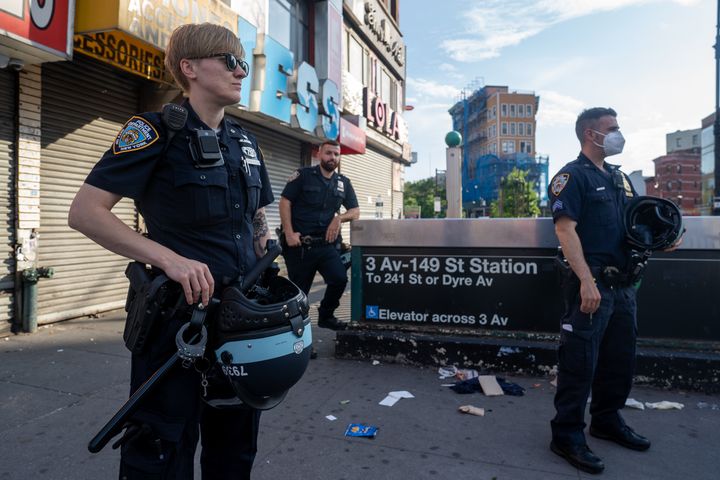 David Dee Delgado/Getty Images New York officers watch for a protest against racial injustice and police brutality at the retail and restaurant heart of the South Bronx on June 4.

“A People’s Tour of the Real Looters of the Bronx” ended last Friday afternoon at Fordham Plaza with demonstrators calling to defund and abolish the police.

“You about to lose your job!” they chanted at the officers who had followed them all afternoon.

Many of these protesters no doubt planned to march again against police brutality this Friday on Juneteenth, an annual celebration marking the end of slavery in the U.S.

When they march, they know they are carrying on a long, proud tradition of Black protest and struggle against the systematic looting of Black lives.

“We must love each other and support each other,” they shouted. “We have nothing to lose but our chains.”