The legacy of liberal icon Ruth Bader Ginsburg is being remembered with a gigantic new street art mural in New York City.

Street artist Elle painted the three-story depiction of the late Supreme Court associate justice ― who died in September at the age of 87 ― on the corner of 11th Street and 1st Avenue in the East Village.

The piece also features Lady Liberty and the Brooklyn Bridge.

“I’m super honored to be able to paint her portrait in New York,” Elle told HuffPost, hailing Ginsburg as “quite the force to be reckoned with working behind the scenes to push equal rights in America.”

California-born Elle “fell in love” with street art after dropping out of art school and moving to New York at age 21.

She wheat-pasted pieces around Brooklyn before becoming “super obsessed” with graffiti and getting sponsored by a spray paint company.

Elle then “took all of my free spray paint and started asking people if I could paint their walls for free.

Elle spent the rest of her 20s honing her craft in New York, later a year in France, and is now mostly on the road worldwide painting her collages of “the all-powerful female — but no one in particular” for clients and at festivals, to the extent the coronavirus pandemic allows.

“I chose the name Elle because it means ‘she’ in French,” the artist explained. “I realized there were very few women graffiti artists, so I wanted to get up for the ladies.”

TaskForce, an agency working with arts, culture and social change, commissioned Elle to paint the portrait of Ginsburg.

When she couldn’t find a suitable wall in the Midwood or Flatbush neighborhoods of Brooklyn, from where Ginsburg hailed, the nonprofit LISA Project NYC found her space in the East Village in Manhattan.

“I don’t typically paint portraits,” said Elle, who spent two weeks on the mural. “But when I was invited to create the piece for RBG there was nothing more that I wanted to do than to paint a memorial piece for her.” 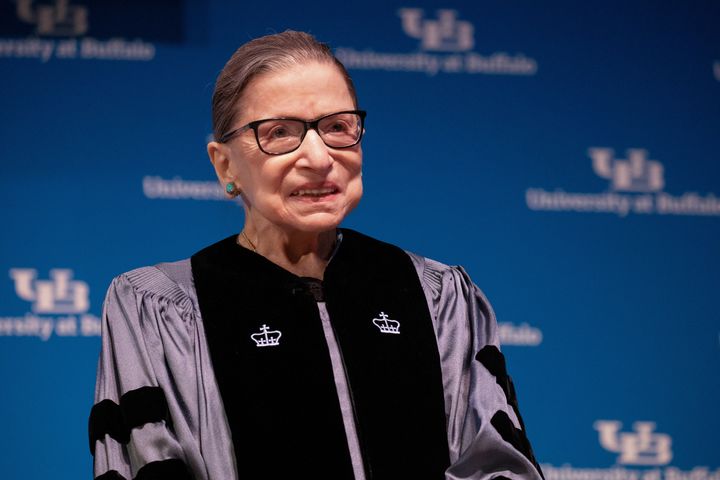 “I love New York, New York loves RBG, and I think it’s fair to say that nearly the entire city was elated about the election results,” she said. “RBG is a hometown native of this city ― and she will forever be loved and an icon here.”

“We are beyond thrilled to see Trump ousted,” the artist added. “And I think this portrait of RBG represents that continuation of hope and joy that this city badly needed after such a hard year with COVID-19.”