WASHINGTON (AP) — Protesters tried to pull down a statue of President Andrew Jackson near the White House Monday night before being dispersed by police.

WUSA-TV in Washington reported that police used pepper spray to move protesters out of Lafayette Square, where the Jackson statue is located. Videos posted on social media showed that the protesters had climbed on the statue and tied ropes around it, then tried to pull it off its pedestal.

The statue shows Jackson in a military uniform, riding a horse that is rearing on its hind legs. The 19th century president’s ruthless treatment of Native Americans has made his statue a target of demonstrators protesting the United States’ legacy of racial injustice. 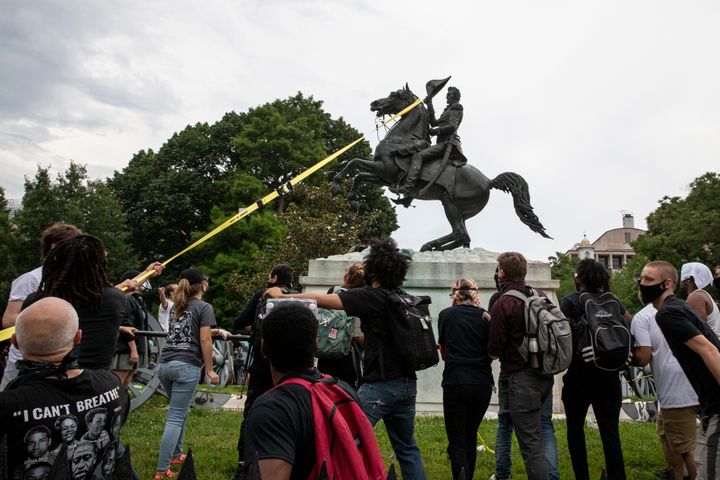 Tasos Katopodis via Getty Images WASHINGTON, DC – JUNE 22: Protestors attempt to pull down the statue of Andrew Jackson in Lafayette Square near the White House on June 22, 2020 in Washington, DC. (Photo by Tasos Katopodis/Getty Images)

The Jackson statue remained on its pedestal Monday night.

President Donald Trump tweeted late Monday that “Numerous people” had been arrested for “the disgraceful vandalism.” He added: “10 years in prison under the Veteran’s Memorial Preservation Act. Beware!”

Numerous people arrested in D.C. for the disgraceful vandalism, in Lafayette Park, of the magnificent Statue of Andrew Jackson, in addition to the exterior defacing of St. John’s Church across the street. 10 years in prison under the Veteran’s Memorial Preservation Act. Beware!

Interior Secretary David Bernhardt was at the scene Monday night, and issued a statement saying: “Let me be clear: we will not bow to anarchists. Law and order will prevail, and justice will be served.”

On June 1, law enforcement officers forcefully cleared peaceful protesters from Lafayette Square so Trump could stage a photo op at a nearby church.