By 2025, the New York State Common Retirement Fund, which disburses some $1 billion in benefits to retirees each year, will sell off its “riskiest” oil and gas stocks, following a review. The state aims to completely eliminate carbon polluters from its portfolio by 2040.

“We continue to assess energy sector companies in our portfolio for their future ability to provide investment returns in light of the global consensus on climate change,” state Comptroller Thomas DiNapoli said in a statement Wednesday morning. “Those that fail to meet our minimum standards may be removed from our portfolio. Divestment is a last resort, but it is an investment tool we can apply to companies that consistently put our investment’s long-term value at risk.”

The divestment process will be done in phases, tackling companies in the biggest polluting sectors first. By early 2021, the state comptroller’s office will complete a review of companies that produce tar sands oil, a particularly dirty source coming mainly from Canada. These companies include Imperial Oil, the Canadian branch of Exxon Mobil Corp. Over the next four years, officials will go on to review fracking firms, oil giants such as Exxon Mobil and Royal Dutch Shell, oilfield service companies such as Schlumberger and Baker Hughes, and storage and pipeline builders including Enbridge and Energy Transfer Equity.

In the 15 years between completing those reviews and 2040, the state will then consider selling off stock in other climate polluters, including utility companies.

“This is one of the most comprehensive divestment plans I’ve ever seen,” said Lindsay Meiman, a New York City-based campaigner with the climate advocacy group 350.org.

The ‘Smarter Strategy’ Ran Its Course

Ireland became the first national government to divest from fossil fuels in 2018. Norway’s sovereign wealth fund followed suit last year. New York City and the Norwegian capital of Oslo have announced similar plans. In all, more than 1,200 institutions ― a plurality of which are religious organizations, universities and philanthropic foundations ― have vowed to sell off their oil, gas and coal holdings.

U.S. states have been more reluctant. While some have shed investments in coal, even California, with its ambitious climate goals, has so far refused to divest oil and gas from its pension funds.

New York state’s announcement offers both symbolic and substantive victories. The state is home to the world’s financial capital, and its $1.7 trillion economy ranks among the 15 largest in the world, with an annual gross domestic product nearly equal to Canada’s. Its pension fund historically owned $12 billion in fossil fuel stocks, including roughly $1 billion in Exxon Mobil.

This was a calamitous year for the oil and gas industry. The coronavirus pandemic spurred a drop in oil prices, leading to the worst quarterly earnings in living memory for companies like Exxon Mobil and Chevron Corporation. While the sector was the worst-performing on the stock market in 2020, the long-term prognosis looks even worse. It takes years, often decades, to profit from new drilling projects. The companies’ value is tied to the projected future earnings on their assets. If fossil fuel use decreases at the rate scientists say is needed to keep global temperatures within a relatively safe range, the majority of those oil fields and wells could become worthless money pits.

Yet New York state’s financial chief had long opposed calls for divestment, arguing that selling off the stocks ― some of which, like Exxon Mobil, yield reliable dividends ― would eliminate the state’s leverage to reform fossil fuel companies from within.

“Having a voice at the table, trying to press them to do the right thing, that in the short run I still think is a smarter strategy,” DiNapoli told Axios last year.

The Long Island Democrat doubled down in August of this year, telling The Associated Press: “Frankly what will happen is the stock would be bought by someone else who does not have our position on this issue. I’m sure that many companies would be very happy if we just sold the stock and did not bother them anymore on this issue.”

In 2019, the Independent Petroleum Association of America praised DiNapoli for his decision “to reject costly, ineffective divestment in favor of remaining invested in developing sustainable technology,” which the trade group said “is more ‘nuanced’ and ‘complex’ than activists are willing to admit.”

It’s Harder To Make Money On Oil And Gas Stocks

So what changed now?

By next year, DiNapoli may have had no choice. Democrats swept last month’s state legislative elections, maintaining control of the New York State Assembly and winning a new veto-proof supermajority in the state Senate. With the votes to override Gov. Andrew Cuomo (D), a centrist whose economic agenda tends to favor big business and the rich, the Legislature looked likely to pass a year-old bill mandating that the state divest from fossil fuels.

Pressure from advocates also grew heavier than ever before. In November 2019, dozens of environmental groups merged separate efforts pushing big banks and investors to stop financing new fossil fuel extraction into one grand campaign called the Stop the Money Pipeline. As the campaign stepped up protests outside corporate offices even amid the pandemic and organized internal shareholder revolts, financial giants BlackRock, Citigroup and JPMorgan Chase announced new restrictions on fossil fuel investments between January and October of this year. 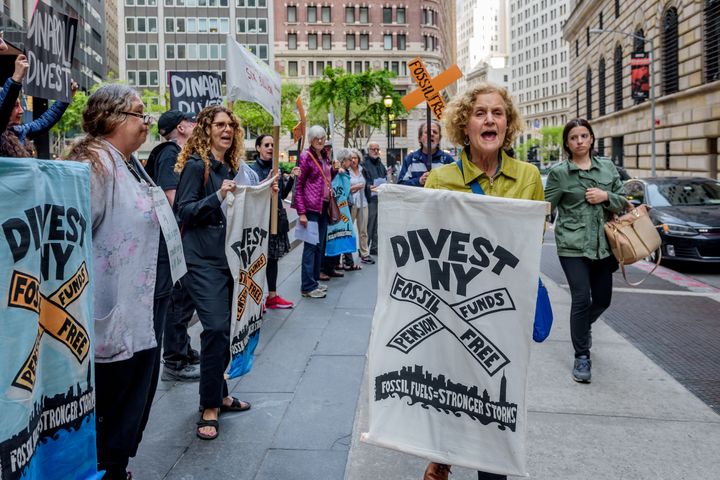 Even popular Wall Street commentators are now shorting the oil and gas industry. In January, CNBC host Jim Cramer announced that he was “done with fossil fuel” stocks.

“I am not here, though, to take political stands. My job is to help you try to make money,” he said on his show, “Mad Money,” weeks later. “And the honest truth is I don’t think I can help you make money in the oil and gas stocks anymore.”

Research supports the decision to divest. In a 2019 survey of almost 200 foundations that had vowed to divest, 94% reported positive or neutral financial performance since pledging to sell off oil, gas and coal stocks. A peer-reviewed study published in March in the journal Climate Policy concluded that “divesting from fossil fuel production does not result in financial harm to investors, even when fossil fuels continue to play a dominant role in the energy mix for some time.”

DiNapoli’s divestment plan goes beyond what activists and state lawmakers had envisioned, Meiman said. The four-year timeline is twice as fast as the 2030 deadline that state lawmakers proposed in their bill. The comptroller’s office is making additional hires to oversee the process and scheduling regular reports on the process.

“This is a real turning point in the divestment movement,” Hridesh Singh, an 18-year-old divestment activist with the group New York Youth Climate Leaders, said Tuesday evening. “We think this will have reverberating consequences across the world in the fight against climate change.”

YouTube Suspends Trump’s Channel For At Least A Week

US Economy Gains Only 245,000 Jobs In November As Virus Intensifies

Are Tides And Waves The Missing Piece Of The Green Energy Puzzle?

For Black Executives Like Pia Flanagan, The Fight For Racial Equity Is Personal