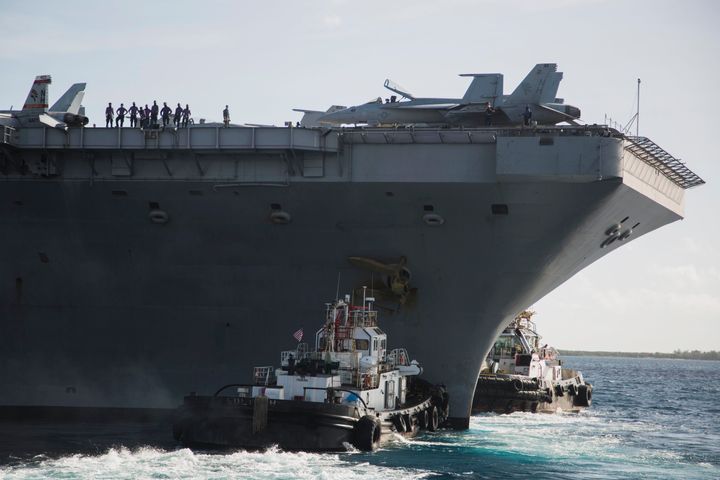 ASSOCIATED PRESS The USS Theodore Roosevelt departs Apra Harbor at Naval Base Guam on Thursday, May 21, 2020, following an extended visit to Guam in the midst of the COVID-19 pandemic.

WASHINGTON (AP) — In a stunning reversal, the Navy has upheld the firing of the aircraft carrier captain who urged faster action to protect his crew from a coronavirus outbreak, according to a U.S. official.

The official said the Navy also extended the blame for the ship’s pandemic crisis, delaying the promotion of the one-star admiral who was also onboard, concluding that both men made serious errors in judgment.

The spread of the coronavirus aboard the USS Theodore Roosevelt while on deployment in the Pacific in March exploded into one of the biggest military leadership crises of recent years. More than 1,000 members of the crew eventually became infected, and one sailor died. The ship was sidelined for weeks at Guam but recently returned to duty.

The decision by Adm. Mike Gilday, the chief of naval operations, to hold both Capt. Brett Crozier and his boss, Rear Adm. Stuart Baker, accountable is a confirmation of concerns expressed by top Pentagon officials who demanded a deeper investigation last month when the initial probe recommended Crozier’s reinstatement as the ship’s captain. The official spoke on condition of anonymity to discuss a report not yet made public.

Melania Trump Posts Juneteenth Tweet And Gets Reminded Of 'Birther' Past