In messages posted on Pence’s verified Facebook and Instagram profiles, the vice president urged “EVERY Patriot” to step up and donate money if they want to defeat presumptive Democratic nominee Joe Biden in November.

“I convinced my father to give you another chance, which is why he’s decided to EXTEND your PERSONAL 500%-MATCH OFFER FOR 1 MORE HOUR,” the ad added: 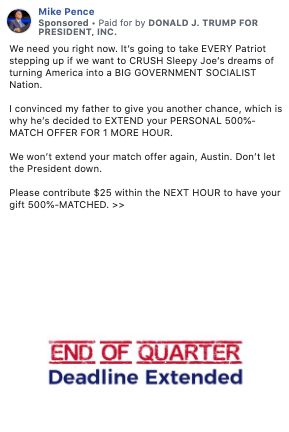 According to a listing on Facebook’s library of political ads, less than $100 was spent on the post that largely targeted voters in Florida and Texas.

It is now “inactive,” per the library.

The Trump campaign paid for the ad.

Twitter users put the description of Trump as “my father” down to a botched copy-and-paste effort, noting how the same wording has been used in messages sent out by the president’s sons, Donald Trump Jr. and Eric Trump.

The Trump campaign seems to have copy pasted the text from a Trump son ad onto Mike Pence’s ad account and I can’t stop thinking of Pence calling Trump, “my father.” pic.twitter.com/1xTKXQKP6d

Bahaha they are so careless. That is the exact wording in an email from Eric Trump. I get emails from the entire trump family, and they are desperate. pic.twitter.com/dcd2YrDYFU

Here is the original by Donny boy in which it reads “My father”.
Naturally they blew the proof read for the Pence plea. pic.twitter.com/nV0ay87TUu

But the theory did nothing to stop wits on Twitter from poking fun at the gaffe:

A reminder that everyone in this regime, from the top all the way to the bottom, sucks mightily at what they do. https://t.co/Ssy2qnk5Hs

I wonder what Mother thinks. https://t.co/YjaEavrsTI

Eh. Pence called Trump “father” is just as believable as this being copy and pasted. https://t.co/gGSVGLygJs

Pence: My wife is Mother
Pence: My boss is Father https://t.co/y6QA3U1PYK

Is Congress Ready For QAnon?