Kentucky voters turned out in record numbers for the primary election Tuesday, even as the threat of the novel coronavirus pandemic lingered, thanks to a hotly contested Democratic Senate race and an expanded vote-by-mail program, which generated unprecedented enthusiasm in Bluegrass State politics.

More than 1.1 million voters likely cast ballots across the state, Kentucky Secretary of State Michael Adams tweeted Tuesday. He cautioned that was not an official projection, but if accurate, it would amount to a turnout rate 10 points higher than that of the primary election four years ago and more than double that from 2012.

The Democratic Senate primary between progressive state Rep. Charles Booker and retired Marine fighter pilot Amy McGrath drove voters out in numbers Kentucky hasn’t seen since 920,000 people cast ballots in the 2008 presidential primary fight between Hillary Clinton and Barack Obama. (Kentucky won’t declare a winner in the Senate primary until next Tuesday because of a large number of absentee ballots.)

National enthusiasm around that race ― the winner of which will face Senate Majority Leader Mitch McConnell in November’s general election ― and Kentucky’s pandemic-driven election efforts drove attention to and worry about the state’s elections. Fears of rampant voter suppression grew when the state decided to close 90% of its typical polling locations and focus almost entirely on mail-in voting. Critics worried that Kentucky would experience the sort of disastrous Election Day problems that occurred in previous primaries in Wisconsin and Georgia.

The predicted disaster did not occur, at least to the extent of prior primaries. But neither was Kentucky’s election a rousing success. Instead, it fell somewhere in between: It was an election that highlighted the potential promise of a robust mail-in voting program, especially in the middle of a global pandemic, but it also underscored mail-in voting’s inability to fully address the systemic deficiencies of America’s restrictive electoral system.

“I think if there’s anything that we can learn from the primaries, it’s that people are going to need to still vote in person,” said Hannah Fried, the campaign director at The Leadership Conference on Civil and Human Rights. “Mail-in voting is critical in responding to the threats posed by COVID, but it’s not a cure-all.” 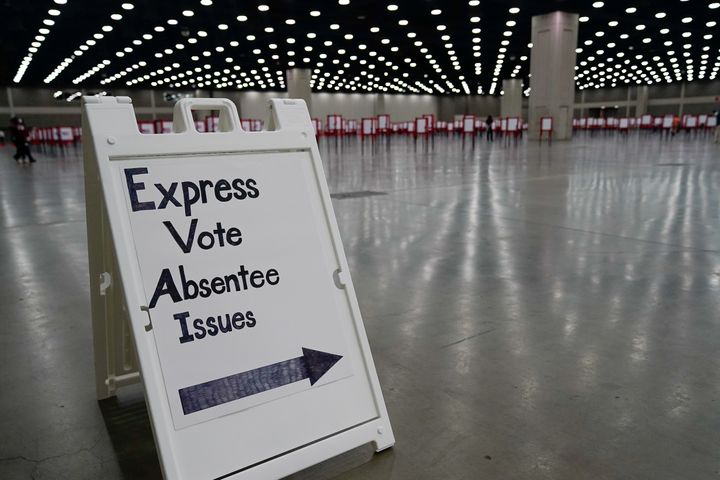 State officials delayed Kentucky’s primaries as part of Democratic Gov. Andy Beshear’s aggressive push to limit the spread of the coronavirus across the Bluegrass State, which has had 14,000 confirmed cases and 559 deaths, totals that rank among the lowest in the nation. As part of the delay, Beshear and Adams, the Republican secretary of state, struck an agreement to expand absentee voting — which in Kentucky is normally allowed only under strict circumstances — to voters across the state.

Kentucky also introduced early voting for the primary, giving residents another new option in a state that is one of just nine that doesn’t typically allow no-excuse absentee ballots or early voting. More than 110,000 people took advantage of early voting, according to unofficial figures, while roughly 160,000 cast ballots in person Tuesday.

“We’re seeing record turnout because we’ve made it easier,” Joshua Douglas, a University of Kentucky law professor, said Monday. “Is it perfect? No. Is it better than it otherwise would have been? Yes.”

But the election also laid bare the problems vote by mail can’t address ― especially not when it was hastily conceived in a state with little experience dealing with a massive influx of mailed ballots.

The process for obtaining an absentee ballot required an online application, placing a burden on many low-income and elderly voters who lack internet access, especially at a time when public libraries and other facilities are closed. And ahead of Tuesday’s deadline, some voters reported that they hadn’t received ballots yet, leading Adams to sign an executive order allowing them to vote in person. 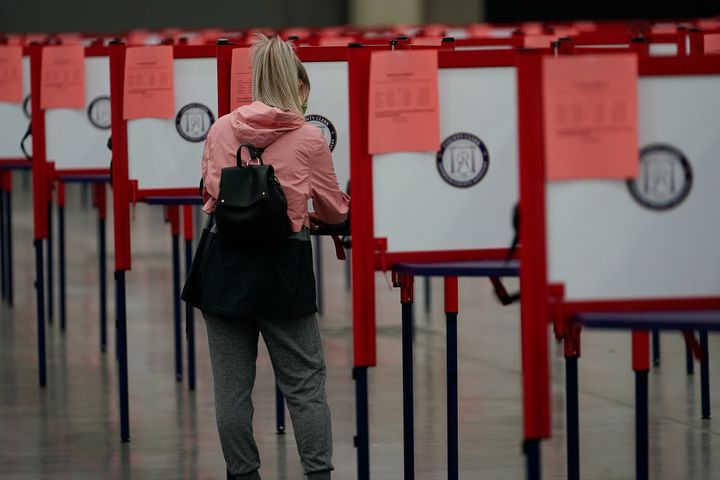 A bigger concern was the decision to cut the number of polling places from 3,700 to just 170, limiting most counties to a single in-person voting locale. The move drew outrage from Hillary Clinton, LeBron James and other political leaders and celebrities. It was not a centralized decision: It came from individual county clerks and was driven by concerns that large-scale in-person voting could worsen the spread of the virus. There were also fears that there wouldn’t be enough volunteer poll workers to staff election sites, Fayette County Clerk Don Blevins said.

“The decision to have one location was made by almost every county clerk independently of each other,” Blevins said. “People kind of came to the conclusion that the safest way to do this would be to reduce down to one in-person location and do appropriate social distancing, PPE and that kind of stuff. When we had to make the decision, the curve was still going up.”

Still, the decision clearly risked disenfranchising some voters, especially in Louisville and Lexington, which together comprise nearly one-quarter of the state’s population and are the combined home to more than half of the state’s Black people. Lexington and Louisville both offered free public transit shuttles to polling locations, but the reliance on solitary voting centers still made it more difficult for voters with limited transportation options to vote ― a fact Kentucky needs to reckon with even if there is no clear and intentional effort to suppress the vote.

“I think the plan is insufficient, but they came up with what they thought was the best thing that we could have, given the circumstances,” said Cassia Herron, chairperson of Kentuckians for the Commonwealth, a progressive group that advocates for expanded voting rights.

“There wasn’t enough intention to be sure that we weren’t suppressing the vote,” Herron said Monday, adding that she would give election officials a “solid C” grade for their efforts. “It would have been a B-plus if they would have started the process sooner and provided [a way] for voters to have some input into the process,” she added.

The voting process ran smoothly throughout the day in Louisville, where elections took place at the Kentucky Fair and Exposition Center in central Jefferson County. Lines were short and quick, according to The Courier-Journal. But as the 6 p.m. deadline neared, there was confusion  over what it meant to be “in line.” Officials closed the doors to the voting area, locking some angry voters outside. An on-site judge eventually extended the deadline and allowed those locked outside into line.

The closest Kentucky came to a disaster was in Lexington, where lines grew longer at the University of Kentucky’s football stadium because of a shortage of check-in scanners and a lack of space, Blevins said, according to the Lexington Herald-Leader.

Wait times were around 90 minutes for large parts of the day, the Herald-Leader’s Daniel Desrochers reported, and the last voter didn’t leave until shortly after 8 p.m. The setup appeared to be the problem in Lexington: Fayette County offered fewer opportunities to vote early than did other counties, and its single location was far less efficient than Louisville’s, leading to long lines (yet again) even though it saw only a fraction of the voters who turned out in its larger neighbor.

That things went relatively well in nearly every location but one doesn’t shield Kentucky from criticism: It’s a virtual certainty that the lack of polling locations kept some voters away, and longer waits in Lexington and confusion at the end of the evening in Louisville placed unnecessary burdens on voters.

“No voters should be waiting that long,” Fried said. “Although it’s not a six- or seven-hour line, we should not view that as anything close to acceptable. And election officials in Kentucky and across the country need to be doing absolutely everything to avoid that in November.”

Civic organizations did the best they could to fill in the gaps. Sadiqa Reynolds, the president of the Louisville Urban League, said her group tried to educate voters on the absentee process and assist them in obtaining a ballot. On Tuesday morning, Reynolds and the Urban League reached a deal with Lyft to provide free rides to polls across the state. 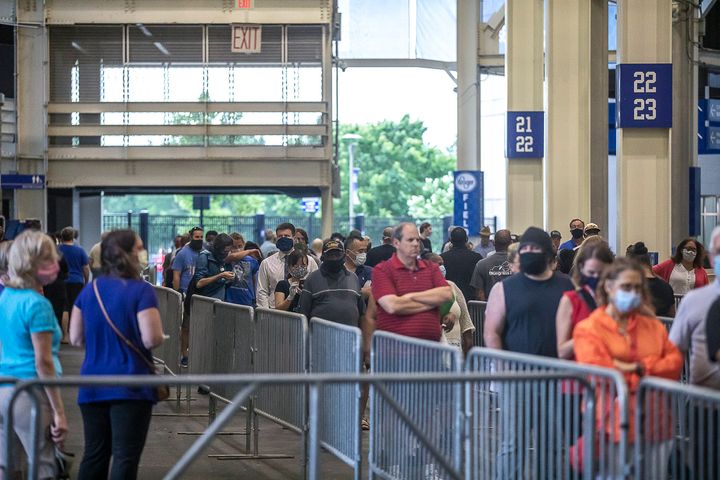 But state officials could have done more in the runup to the race to address clear gaps in the process, and the state needs to take steps now to fill them in before November, Reynolds said. Kentucky needs to continue to expand early voting opportunities and locations. It should alter its vote-by-mail program to send ballots to all registered voters so they don’t have to go through the burdensome application process. And there was widespread agreement, even before Election Day, that Kentucky counties should have kept more polling places open, especially in its largest and most populated counties.

“We know from research just on voter registration laws that when you add steps to the voting process, you tend to shake loose resource-poor voters,” said Stephen Voss, a University of Kentucky political science associate professor. “You tend to shake loose minority voters. And we added a step: Now it’s not just, you have to register, and you have to vote. We’ve gone to a third step. You had to register; you had to request an absentee ballot, and then you had to vote.”

The general view of Kentucky’s primary election among voting rights groups and observers is that it was a step in the right direction and that the qualified success of the vote-by-mail effort ― especially in a state that hadn’t tried it before ― should bolster arguments for improving and implementing it again in November. But it also has to be a part of a more equitable voting system overall, Voss and others argued. The last-minute problems in Louisville are a sadly typical feature of Kentucky elections, thanks to a 6 p.m. poll closing time, the earliest in the nation.

Extending that anachronistic deadline would go a long way toward making the state’s elections more accessible. And, as with many states, Kentucky needs significant investment into its voting and election infrastructure ― help that will only come if Congress approves more funding, which McConnell, who hasn’t commented on Kentucky’s election changes, and the Senate GOP have so far blocked.

Kentucky Democrats and Republicans have been locked in a tug of war over voting access for most of 2020. Beshear restored voting rights to more than 100,000 convicted felons, fulfilling a promise made during his campaign last year, and many cast ballots for the first time this year. But the GOP-controlled legislature also passed a new voter ID law, then overrode Beshear’s veto of it in April.

Kentucky currently has no vote-by-mail plan in place for November, when the specter of the pandemic could still hang over the state. But it seems possible and maybe even likely that Beshear, Adams and election officials could strike a similar agreement for the general election. But local election officials also need to expand in-person options, and Kentucky’s larger problems will only be fixed if it addresses long-standing voter restrictions that were not unique to this election.

“It’s important to judge ourselves not just how we’ve been, but how we could be,” Reynolds said. “We did OK in Kentucky [on Tuesday], but I think we can do better.”

Police Reform Stalls Out In The Senate