The coronavirus pandemic has given way to a host of rationalizations for limiting access to polling sites across the country, concerning voting rights activists.

As voters in Kentucky and New York cast ballots in primary elections on Tuesday, the pall of the pandemic and the specter of voter suppression have created a climate of uncertainty for some who may want to vote in person but question how they can do so safely and efficiently.

Kentucky, which has had thousands of polling places in previous elections, has merely 170 open on Tuesday, including a single polling place for the state’s largest city: Louisville, which has more than 600,000 residents.

There had been no reports of major incidents as of noon on Tuesday, but voting rights advocates still took issue with the process by which the polling sites were closed. 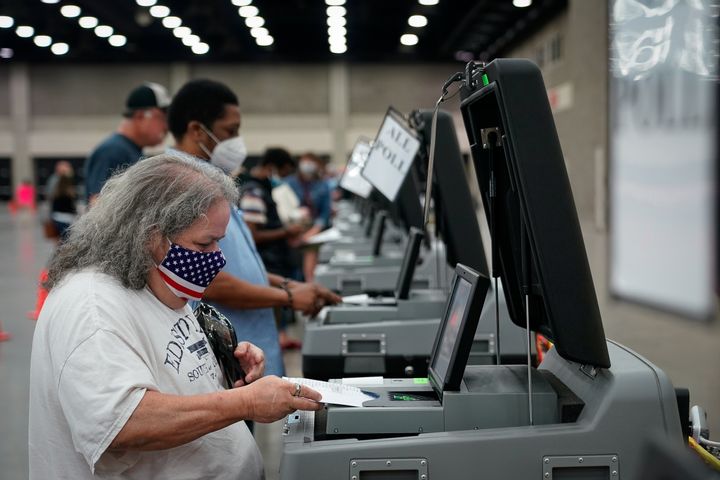 Bryan Woolston / Reuters A voter casts her ballot in Louisville, Kentucky, on Tuesday.

A federal judge in Kentucky ruled last week against plaintiffs, including a local Republican legislator and several voters, who claimed the drastic winnowing of polling places in the county’s most populous and diverse districts violated the First and 14th amendments, as well as the Voting Rights Act of 1965.

The plaintiffs requested the judge, a Reagan appointee named Charles R. Simpson III, “enter permanent and preliminary injunctive relief to prohibit the use of a single polling location” in counties with more than 35,000 registered voters. Simpson denied their request, stating his view that vast restriction of polling places in these counties didn’t amount to a constitutional violation.

“While it may seem intuitive that, when it comes to polling places, more is better, that is not a call for this Court to make,” Simpson wrote, “unless we first find a constitutional or statutory violation.”

Charles Booker, a Kentucky Democrat vying for the party’s nomination to compete in November’s Senate election, said Tuesday that restricting all of Jefferson County’s voters to a single polling place still amounts to voter suppression, even though the governor and secretary of state previously moved to expand vote-by-mail during the primary.

“One location is just gonna naturally make it harder for folks who don’t have transportation or aren’t able to stand in line,” Booker told reporters.

.@Booker4KY made a brief stop here for photos and to reiterate that his team is organizing free Lyft rides to the polls and how “suppression” is still occurring today. pic.twitter.com/OS3FGFg14S

Cassia Herron, the board chair for Kentuckians for the Commonwealth, a progressive advocacy group, said “there wasn’t enough intention to be sure that we weren’t suppressing the vote.” She said officials in the state should “have started the process earlier” and provided a way for voters and voting rights groups to “have some input in the process.”

New York also slashed several polling locations ahead of its primary day, citing insufficient staffing due to coronavirus as the primary cause. Chenango County in upstate New York closed all polling places except for one that’s located inside the county sheriff’s office, The Daily Star reported.

The Chenango County Board of Elections, which is led by a Democrat, dismissed a petition residents circulated that claimed going to a polling place full of sheriff’s deputies would intimidate voters.

“Why would it?” asked Carol Franklin, the elections commissioner for the county.

Officials in Wisconsin, for example, drastically slashed the number of polling places across the state ahead of its primary in April, forcing residents in its most densely populated, diverse districts to wait in long lines. And at least 70 people tested positive for coronavirus after voting in person on Election Day in Wisconsin; there are competing studies as to whether those cases contributed to a spike in positive tests shortly after.

President Donald Trump himself has routinely downplaying the need for special accommodations to keep voters safe and has blatantly attacked the concept of voting by mail ― even though he and several members of his administration have done so previously.