De Blasio called Juneteenth “a day for truth-telling, a day for examination and shining a light.” The day will be an official city and school holiday.

“It’s a celebration of a liberation that never really came. The fact is, it’s also a day of reckoning,” de Blasio, a Democrat, said Friday in his daily news conference. “Every city worker, every student will have an opportunity to reflect on the meaning of our history and the truth and to think about the work that we have to do ahead.”

Black history is American history. Proud to announce that beginning next year, Juneteenth will be an official city and school holiday.

Juneteenth has added significance and urgency this year, coming amid weeks of large anti-racism and anti-police-brutality protests in cities across the country — including in New York City — in response to the recent killings of George Floyd, Breonna Taylor, Ahmaud Arbery and other Black people over the years. The incidents and subsequent protests have also catalyzed reckonings over systemic racism and white supremacy across industries and institutions.

“Our city has long prided itself as being a beacon, and in many ways we are, to the world,” de Blasio said. “But our city also has a very painful history. Slavery was alive and well in New York City for a long time. New York City gained much of its prominence and wealth from slavery. Redlining, discrimination of every form existed here in liberal, progressive New York City for generations. In too many ways, discrimination is alive and well today. Structural racism pervades this city, in ways that are still not acknowledged or recognized, and we have to change that.” 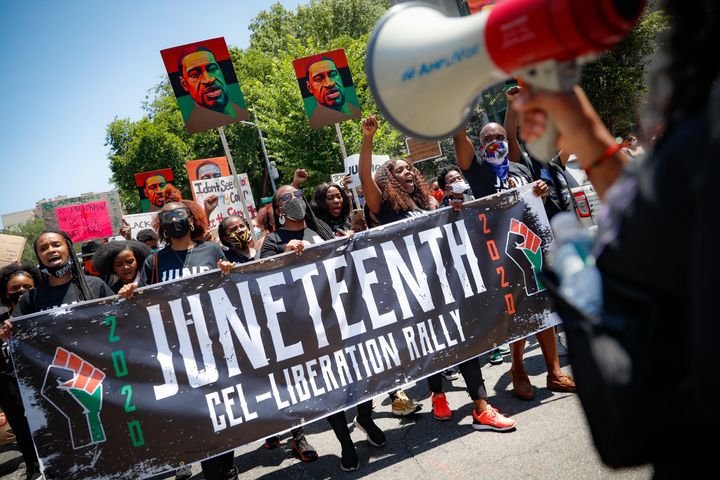 ASSOCIATED PRESS Protesters chant as they march after a Juneteenth rally at the Brooklyn Museum Friday.

In recent weeks, many companies designated the day as a paid holiday. And after years of activism, there is a growing movement in Congress to make Juneteenth a federal holiday.

At least 60% of Americans now support making it a federal holiday, according to a HuffPost/YouGov survey published Friday.

Demonstrators in dozens of cities on Friday took part in peaceful marches and rallies to mark Juneteenth.

In New York City, organizers held a range of events, including a march from Harlem to Central Park, a rally at the Brooklyn Museum and a march and bike ride across the Brooklyn Bridge, among many other gatherings planned for the day.

The Real Looters Of The Bronx