U.S. District Court Judge Matthew W. Brann, who heard Giuliani’s argument on the case earlier this week, said the court “has been presented with strained legal arguments without merit and speculative accusations” that weren’t tied to the actual complaint nor supported by evidence.

“In the United States of America, this cannot justify the disenfranchisement of a single voter, let alone all the voters of its sixth-most-populated state. Our people, laws and institutions demand more,” Brann wrote. 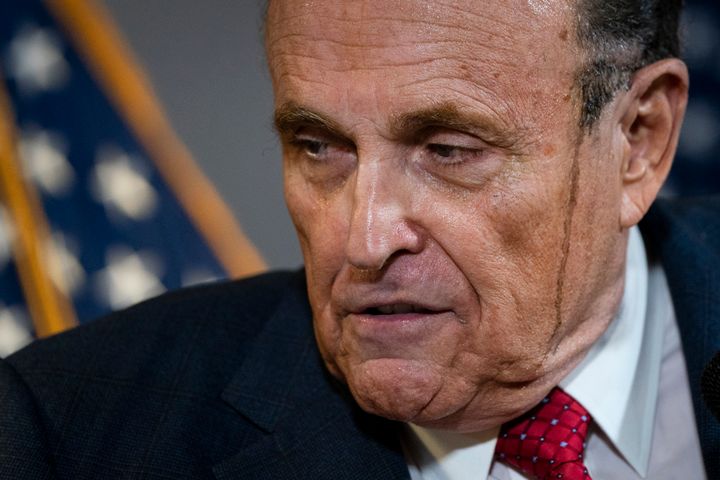 Drew Angerer via Getty Images Rudy Giuliani speaks to the press about various lawsuits related to the 2020 election at the Republican National Committee headquarters on Thursday.

Giuliani did not immediately respond to HuffPost’s request for comment on Saturday evening.

Asked earlier whether he had made a deal with Trump in exchange for a preemptive pardon, Giuliani told a HuffPost reporter, “Get lost.”

Brann said that it was perfectly legitimate for Pennsylvania counties to offer voters an opportunity to “cure” their mail-in ballots. The Trump campaign had complained that elections officials in Democratic-leaning counties had done a better job than officials in Republican-leaning counties advising voters when they made a mistake on their mail-in ballots and argued this amounted to an equal protection violation. Brann said that argument was rubbish.

“No county was forced to adopt notice-and-cure; each county made a choice to do so, or not. Because it is not irrational or arbitrary for a state to allow counties to expand the right to vote if they so choose, Individual Plaintiffs fail to state an equal-protection claim,” he wrote.

“Even assuming that they can establish that their right to vote has been denied, which they cannot, Plaintiffs seek to remedy the denial of their votes by invalidating the votes of millions of others. Rather than requesting that their votes be counted, they seek to discredit scores of other votes, but only for one race. This is simply not how the Constitution works,” Brann wrote.