For much of the 2020 election cycle, Democratic presidential nominee Joe Biden has focused intently on cementing gains among white women, a voting bloc that helped deliver Democrats massive victories in midterm elections two years ago and could do so again in November.

But in the closing stages of the race, Biden and other Democrats have shifted their focus back to a more traditional backbone of the party’s support: Black voters. And specifically, Black men. Democratic strategists and pollsters say this push is vital to shore up one of Biden’s only remaining vulnerabilities: The possibility that Black voters, and younger Black men, in particular, won’t turn out and support Biden at levels necessary to ensure his victory.

Last week, Biden deployed one of his strongest weapons in the race, sending former President Barack Obama to campaign in Pennsylvania and Florida, two battleground states where Biden leads in polling averages and where victory would all but cut off President Donald Trump’s path to victory.

Obama urged Black and young voters to turn out in huge numbers at one stop and made another pitch at a Philadelphia high school. The Biden campaign had already rolled out new television and radio advertisements targeting Black voters in more than a dozen battleground states. 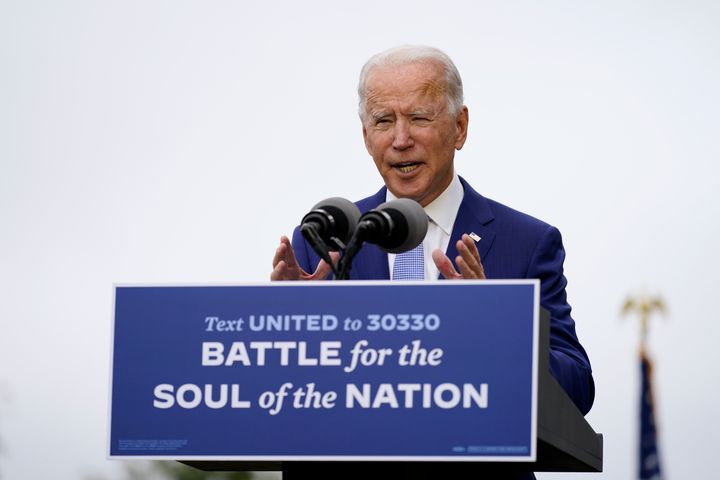 A CBS/BET poll released Sunday found that 90% of Black voters overall, 92% of Black women and 87% of Black men plan to vote for Biden, margins roughly comparable to those Obama won in 2008 and 2012. Just 11% of Black men support Trump, according to the poll, a margin slightly down from 2016, when he lost that group to Hillary Clinton, 81-14. Other CBS polls released this week found Biden ahead by similar margins among Black voters in Florida and North Carolina, and he has small leads in each state.

But younger Black voters, and younger Black men in particular, have not been as enthusiastic about Biden: Late this summer, a survey from HIT Strategies, a Washington messaging firm that focuses on millennial, female and minority voters, found that among Black men under 50 in battleground states, 18% supported Trump — the sort of shift that could dramatically alter the election, especially if anticipated gains among white suburban voters and elderly voters don’t materialize.

What Donald Trump is attempting to do is not to disqualify Joe Biden, but to disqualify the system. And that is very effective with voters who feel like the system has never delivered for them anyway. Terrance Woodbury, partner at HIT Strategies

Biden’s efforts to win over younger Black men in the final stages of the race may be working: The former vice president led Trump 77-12 among Black men, and 76-9 among Black men under 50, in battleground states, a new poll conducted by HIT Strategies found last week.

Black men will undoubtedly provide one of Biden’s largest and most consistent sources of support, but they have been a focus of his campaign since the end of the Democratic primary. Turnout declines in 2016 ― which occurred in part because of voter suppression tactics ― helped doom Clinton’s campaign.

Early on, the Biden campaign homed in especially on young Black men, hosting events in swing states to target one of Democrats’ most reliable and vital bases.

Polling figures on subsets of the Black electorate often vary widely, thanks to small sample sizes in polls or surveys that don’t specifically focus on Black voters. But surveys this year have suggested that Trump was making inroads among young Black voters in particular. His support by Black Americans between the ages of 18 and 44 doubled over the last four years, from roughly 10% in 2016 to 21% ahead of November’s election, according to a survey from UCLA Nationscape and Democracy Fund.

In Pennsylvania, a poll released by a progressive group there (and first reported by Politico) showed that just 72% of Black men under 50 supported Biden ― a 19-point drop from his support among Black men over 50. Fourteen percent of younger Black men in Philadelphia plan to vote for Trump, and another 9% are undecided, the poll found.

The CBS/BET poll found that while younger Black voters still overwhelmingly favor Biden, less than half of 18-to-29-year-olds were very enthusiastic about supporting him. They were also less excited by Biden’s selection of Kamala Harris as his vice presidential running mate than their older counterparts. 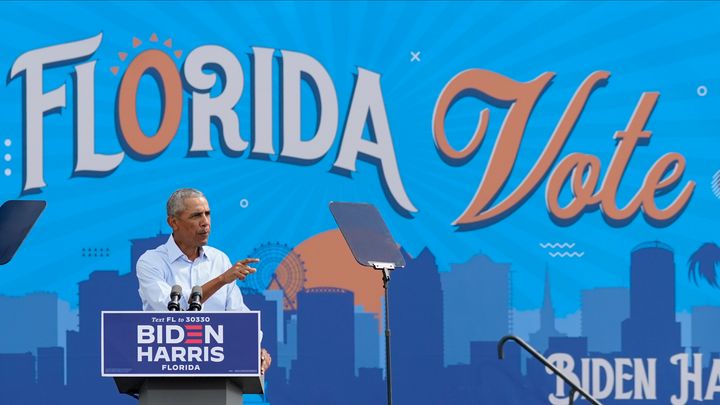 AP Photo/John Raoux Former President Barack Obama, who drew record turnout by Black voters in 2008 and 2012, has campaigned for Biden late in the race in Pennsylvania and Florida, urging young and Black voters to turn out and vote early.

The most recent poll from HIT Strategies suggests that younger Black men may be solidifying behind Biden in the election’s final days, and Woodbury posited that Trump’s declines were in large part due to the fact that Black voters who expressed support for the president are less likely to turn out to vote because their positive views of Trump are rooted primarily in skepticism toward the Democratic Party.

But if undecided voters push Trump’s support among Black men closer to the 18% figure from this summer, and Biden’s expected gains among white voters don’t materialize, it could potentially tip states like Pennsylvania toward the president. And if similar shifts take place in swing states like Michigan or Florida ― where Biden may still struggle to match Clinton and Obama’s margins among Latino voters ― it could potentially swing the election back toward Trump.

That may seem unlikely, but the combination of incremental gains and lower turnout among Black men is one of Trump’s last remaining paths to victory ― at least via the vote.

And it’s a path he’s followed before. Four years ago, Trump’s pitch to Black voters focused on the idea that they had been taken for granted by the Democratic Party, and thus had little to lose by giving him a chance. The Trump campaign developed a “deterrence” strategy that used targeted social media campaigns laced with disinformation to dissuade Black and Latino voters from turning out in Florida, a state Trump won by less than 2 points. (The strategy was exposed in October by the Miami Herald and the United Kingdom’s Channel 4.)

It’s not clear whether the Trump campaign is using an identical strategy this time around. But since Minneapolis police killed George Floyd in May, Trump has spent millions of dollars on targeted social media ads focused on criminal justice issues, including Biden’s support for the 1994 crime bill ― a piece of legislation often cited as a driver of mass incarceration that was also a source of young Black voters’ antipathy toward Biden during the Democratic primary.

The ads have heavily targeted voters in Pennsylvania, Michigan and Florida in recent weeks, but they aren’t necessarily meant to persuade younger Black men to vote for Trump. Rather, they’re aimed at depressing Black turnout by bolstering the perception that there’s little daylight between Trump and Biden when it comes to policy on race. 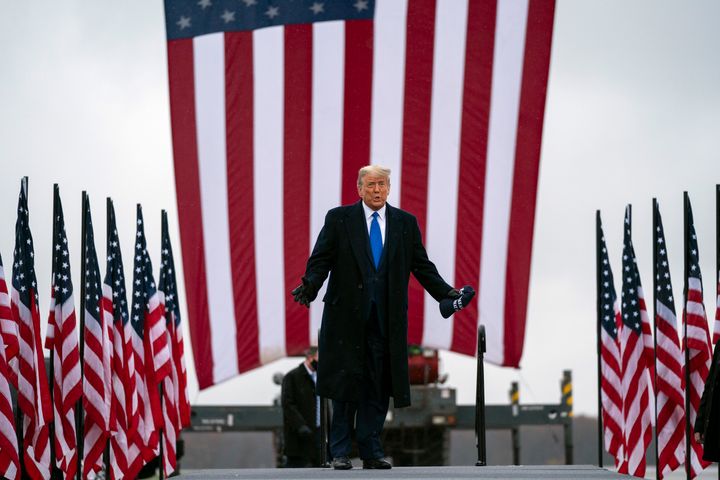 AP Photo/Evan Vucci Surveys this year have shown higher-than-expected support for Trump among younger Black voters, although recent polls have suggested those voters may be solidifying behind Biden in the race’s closing days.

In focus groups this year, Woodbury heard from one young Black voter that his life hadn’t improved much under Obama or worsened much under Trump, an idea that fueled the belief that presidential politics didn’t matter.

But a lack of enthusiasm for Biden isn’t solely Trump’s creation ― it also reflects ways the Democratic Party and the Biden campaign have fallen short in reaching out to and engaging those voters to counter Trump’s claims.

Biden released a detailed policy plan aimed at Black voters that touts his support for a $15 per hour minimum wage, investments in affordable housing and Black businesses, his desire to end discriminatory practices in everything from housing to schooling and policing, and efforts to bolster voting rights.

The plan proved popular among younger Black voters during focus groups Woodbury has conducted, but most of them hadn’t previously heard of it ― a sign that Biden’s outreach to young Black men hasn’t been as strong or as targeted as it should have been.

“I think we’re missing them on social media,” Woodbury said. “When they hear about [Biden’s plan], they are quite persuaded by it. But we have to do the work of getting it to them, and not expect them to do the work of browsing through the website and dissecting a 30-page proposal. Deliver it to the palms of their hands, because that is where Donald Trump has proven to be the most effective.”

While margins among Black and Latino men are a vulnerability for Biden, multiple Democratic consultants insisted to HuffPost this week that they don’t yet amount to a major concern. Woodbury, for his part, believes that Biden’s gains among white voters ― women and whites without a college degree, in particular ― are a signal that Biden is just putting together a different coalition than the one that pushed Obama to the White House.

Progressive groups have also spent most of the 2020 cycle trying to blunt Trump’s efforts to bolster support among Black and Latino voters: One such group, New Florida Majority, has made more than 1 million calls and reached nearly 290,000 Black voters across the Sunshine State, and has hit similar numbers in Florida’s Latino communities. Progressive groups there have also organized heavily around a statewide ballot measure to raise the minimum wage to $15, and with polls predicting a dead heat in the state, they are confident their efforts to reach Black and Latino voters will pay off, said Andrea Mercado, New Florida Majority’s executive director.

“There are lines outside of polling places in Black communities, so I think that’s a really good indicator,” she said. “And when you take a close look at voting and turnout levels, we’re seeing a lot of people who didn’t vote in 2016 showing up to the polls.”

Biden’s closing argument to younger Black voters may be even more important for Democratic candidates who might not be able to rely on Trump fatigue among white voters to win close House and Senate races. Woodbury pointed to the heated U.S. Senate contest in Michigan, where Sen. Gary Peters (D) is trying to hold off a challenge from Republican John James, a Black military veteran and businessman who is running roughly 5 points behind Peters in the polls, according to RealClearPolitics averages.

Stephen Colbert: This Trump-Ted Nugent Moment Is ‘Perfect’ Summary Of Where We're At