On the day Jo Rae Perkins won Oregon’s Republican primary for U.S. Senate this May, she tweeted a catchphrase that a select group of people would instantly recognize: “Where we go one, we go all.” It was the signature slogan of QAnon, a far-right conspiracy movement.

Perkins has little chance of defeating incumbent Democratic Sen. Jeff Merkley in November, but her primary win signaled something strange and troubling moving beneath the political waves.

Then Marjorie Taylor Greene, another vocal QAnon follower, trounced her opponents in a June primary in Georgia in a heavily Republican district, finishing 20 percentage points ahead of her closest competitor. If Greene, who has expressed racist views, maintains her current level of support, she’ll win a runoff in August and will likely be elected to the House this fall.

On Tuesday, Lauren Boebert, a pistol-packing rookie candidate who claims to be “very familiar” with QAnon and hopes that it “is real,” ousted a five-term Republican Congressman in a Colorado primary. With her victory, 11 GOP candidates in the general election have embraced or flirted with a conspiracy movement that the FBI considers a potential domestic terrorism threat.

QAnon is, put simply, an ever-mutating cluster of baseless conspiracy theories. Its foundational belief is that a high-ranking government official known only as “Q” has been using cryptic posts on internet message boards to transmit clues about nefarious elites and so-called deep state bad actors who are waging a secret spiritual war against President Donald Trump.

It is a struggle that QAnoners hope will culminate in an authoritarian moment they call “The Storm.” This is when the military will round up and imprison ― or perhaps execute ― Trump’s antagonists, who usually tend to be Democratic politicians, members of the media, Hollywood celebrities and other types targeted by the political right. No lunacy is too far-fetched for QAnon, no contravening fact worthy of consideration.

View pointed to Alpalus Slyman, a 29-year-old Massachusetts man who last month — in the apparent belief that police were part of a deep state conspiracy — led law enforcement on a high-speed chase in his minivan with his five children inside, including an 8-month-old baby. Earlier that day, Slyman posted on Facebook about COVID-19 being man-made, a common belief among QAnoners.

Hitting speeds of 110 mph, Slyman live-streamed the chase on Facebook with his children in the background, pleading with him to stop.

“Donald Trump, I need a miracle or something. Somebody. QAnon, help me!” Slyman said before allegedly ramming a police car and hitting a tree. (The children were unharmed.)

Slyman is but one example of QAnon followers acting out in dangerous ways. In the last two years, people inspired by QAnon conspiracies have staged an armored truck standoff at Hoover Dam, occupied a cement factory they believed was involved in a child trafficking ring, raided homeless camps while heavily armed in search of nonexistent sex traffickers, attempted to kidnap a child from protective custody, murdered a Gambino family crime boss and driven hundreds of miles with more than a dozen illegal knives while live-streaming a plan to “take out” Joe Biden.

Nevertheless, Republican leaders have refused to address QAnon, even as its adherents plot potentially successful courses for Congress. The GOP refuses to address the possibility that its caucus might soon include adherents of an anti-democratic movement whose members believe Bill Gates is trying to implant microchips in humans in order to depopulate the planet.

After Boebert’s win, the National Republican Congressional Committee dodged questions about QAnon and tried to portray Democrats as the real conspiracists.

“We’ll get back to you when [Democratic Congressional Campaign Committee Chairwoman] Cheri Bustos and the DCCC disavow dangerous conspiracy theorists like Nancy Pelosi and Adam Schiff who have pushed without evidence their wild-eyed claims that the president of the United States of America is actually a secret Russian double agent under control of the Kremlin,” said Bob Salera, a spokesman for the National Republican Congressional Committee.

But QAnon is an issue the GOP might not be able to avoid much longer. In addition to the candidates who have qualified for the general election, several of whom are longshots in their Democratic districts, more than 50 other Republican candidates “have endorsed or given credence” to QAnon or promoted its content, according to a report by the liberal research outlet Media Matters. Around half of those have lost their primaries or dropped out already. But their numbers show how easily delusional thinking can take hold in the Republican base during the Trump era, especially when boosted by a dishonest president and his family members.

Politically, it’s a fascinating success story. It started in 2017, and now in 2020, they are possibly going to have more than one activist be elected. That would be a stunning result for any movement. Travis View, a conspiracy theory researcher and the host of the “QAnon Anonymous” podcast

QAnon has expanded exponentially in the three years since it debuted on 4chan, an online message board teeming with neo-Nazis. Its growth was aided by the permissiveness and complicity of Facebook, YouTube and Twitter, which have little incentive to crack down on an always-online community of users who hyperactively generate content.

In recent months, QAnon’s growth only appears to be accelerating. As HuffPost reported last week, the coronavirus pandemic has “turbocharged” the reach of QAnon’s disinformation and the movement’s ability to recruit. A HuffPost analysis of dozens of the biggest QAnon accounts on social media revealed a hockey-stick-graph increase in followers and subscribers starting in mid-March. Most accounts have tripled their follower numbers. One Facebook group saw an increase in membership of more than 5,000%.

“There’s nothing other than growth,” said Brian Friedberg, the senior researcher of the Technology and Social Change Research Project at the Shorenstein Center on Media, Politics and Public Policy at Harvard Kennedy School. Friedberg has studied QAnon extensively. “By any stretch we have to measure online social movements, it has grown.”

Once relegated to the online fever swamps of the political right, QAnon has now infected the 2020 election cycle.

“Politically, it’s a fascinating success story,” View said. “It started in 2017, and now in 2020, they are possibly going to have more than one activist be elected. That would be a stunning result for any movement.”

What this means for America is that by next year, Congress might have some members with extreme views wholly untethered from reality.

Many QAnoners, for example, believe that elite Democratic pedophiles are torturing children in satanic dungeons to extract a chemical called adrenochrome from their blood or glands or brains for use as a drug. Some kids might also be sacrificed to Moloch, a Canaanite god. Others will languish as mole children in underground bunkers beneath Central Park, awaiting rescue in a military operation that will never come to pass.

Some QAnoners also believe that a COVID-19 vaccine, when it finally arrives, will be used for mind control, whereas a type of industrial bleach used on wood pulp offers a cure when imbibed. Some think that American banker J.P. Morgan sank the Titanic. Or that German Chancellor Angela Merkel is the granddaughter of Adolf Hitler. Or that platoons of antifa super soldiers are being bused into Palookaville to burn down the Starbucks. 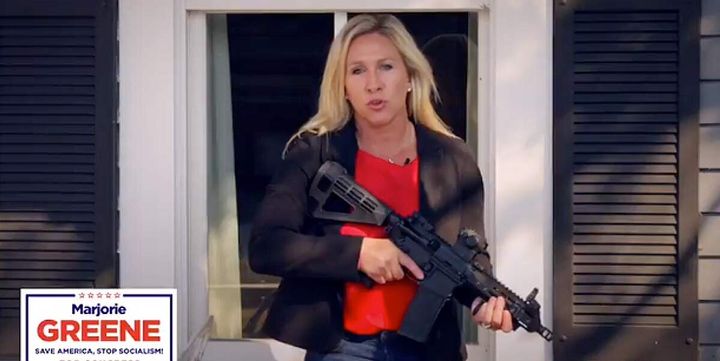 In a 2017 YouTube video during which she talked about an “awakening” that would expose corruption, Greene, the QAnon candidate with the best chance of making it to Congress, sounded the part of a true believer. Or a cultist.

“Q is a patriot. He is someone that very much loves his country, and he’s on the same page as us, and he is very pro-Trump,” she said. “I’m very excited about that now there’s a once-in-a-lifetime opportunity to take this global cabal of Satan-worshipping pedophiles out, and I think we have the president to do it.”

Greene has received endorsements from ultraconservative members of Congress such as Reps. Matt Gaetz (R-Fla.) and Jim Jordan (R-Ohio) and has taken money from a political action committee connected to former GOP Rep. Mark Meadows (N.C.), who is now Trump’s chief of staff. She was exposed in May as having ties to both an anti-government militia leader and a longtime member of the white power movement.

But it was only in June, after Politico revealed Greene’s history of racist, Islamophobic and anti-Semitic remarks, that Republican leaders disavowed her bigoted views. Still, they said nothing about QAnon.

With the GOP striving to cling to minority rule in a nation that largely rejects both its policies and its current leader, the party seems willing to tolerate a radicalized and growing constituency of conspiracy theorists in its hunt for votes.

And some Republican candidates who might not be naturally drawn to QAnon appear to be opportunistically milking the community for support.

Consider Rich McCormick, who is running for a toss-up open seat in Georgia’s 7th Congressional District and has been retweeted multiple times by Trump. McCormick has appeared twice on a livestreamed YouTube program that is part of the Patriots’ Soapbox News Network, a QAnon hub. In one appearance, he promoted a debunked racist and anti-Semitic far-right conspiracy theory about George Soros and Democrats’ laundering money through a front group to fund Black Lives Matter. A version of this false claim was first circulated by a QAnon account.

McCormick has also promoted COVID-19 misinformation popular in QAnon circles. At the beginning of the pandemic, he repeatedly minimized the threat of the virus. In April, he hyped hydroxychloroquine, which last month the FDA revoked as a treatment, citing dangerous side effects. On Friday, his campaign’s Twitter account again promoted hydroxychloroquine.

But McCormick is an emergency room physician whose candidacy has been endorsed by the Medical Association of Georgia, along with the PAC for the Club for Growth, a major Republican free-market organization based in Washington. The PAC pumped $1 million into the primary to help him win, according to Politico. With McCormick’s background and establishment trappings, it’s hard not to see a Trumpian version of a 2010 Tea Party astroturfer when he posts a video of himself doing pushups in a shirt with the “Punisher” skull logo that is wildly popular among QAnon followers.

“Dr. McCormick does not embrace, nor is he ‘open’ to, the QAnon conspiracy theory,” said McCormick’s spokesman, John Simpson, on Friday. “He wasn’t even aware of the term until the DCCC began trying to link him to it.”

When HuffPost asked Simpson how McCormick could have been unaware of QAnon after appearing on a QAnon-centric program, Simpson said, “Dr. McCormick talks to a variety of outlets, some with agendas or viewpoints he doesn’t agree with, including the Huffington Post.”

McCormick did not speak to HuffPost for this story.

Nearly 150 years ago, Nietzsche declared “God is dead,” killed off by the scientific rationality of the Enlightenment. Today on the American political right, it is scientific rationality that is the victim, murdered by the Republican Party as it courts those who venerate a false prophet spouting gibberish in the benighted echo chambers of the internet.

“A lot of this is the chickens coming home to roost for Trump and other Republicans for pushing conspiracy theories and making promises they couldn’t fulfill,” View said.

God may still be dead. But Q lives.