Workplace safety officials in California on Wednesday announced fines against five grocery stores that allegedly put workers in danger of contracting the coronavirus. Workers from two of those stores died of COVID-19.

The California Division of Occupational Safety and Health said four Ralphs locations and a Food 4 Less store all violated the law by not updating their safety plans for the pandemic. Certain stores also failed to report coronavirus infections, properly train employees on pandemic protocols or maintain social distancing.

All of the stores are owned by Cincinnati-based Kroger, the largest grocery conglomerate in the U.S.

Officials said two Ralphs stores failed to inform the state after a worker died at each ― one in Culver City and another in Sherman Oaks. Regulators learned about the two deaths roughly a week after they happened. California law requires that a death likely to be job-related be reported to Cal/OSHA within eight hours of the employer learning about it.

Cal/OSHA Chief Doug Parker said in a statement that employers are responsible for determining whether an employee’s illness may have resulted from work.

“Grocery retail workers are on the front lines and face a higher risk of exposure to COVID-19,” Parker said. “Employers in this industry must investigate possible causes of employee illness and put in place the necessary measures to protect their staff.” 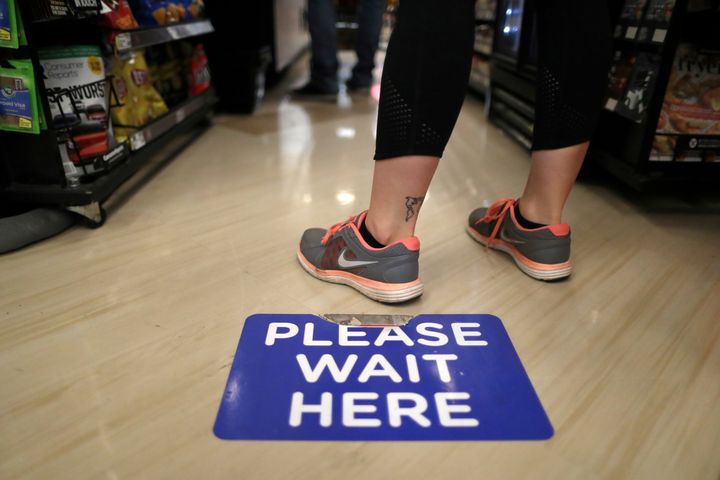 Lucy Nicholson / Reuters Social distancing decals are seen on the floor of a Ralphs grocery store in Los Angeles.

Ralphs and Food 4 Less said in a statement that the state’s announcement on the fines was a “misrepresentation of the facts,” and that some of the COVID-19 cases date back to before the state issued workplace guidelines on dealing with the disease. The chains said they plan to appeal the citations and air their side of the story during hearings.

“To be clear, the safety of our associates and customers is our top priority,” the statement said. “We have learned and continue to learn while keeping our stores and supply chain open and serving Southern California during the pandemic.”

Grocery store employees have worked through every coronavirus surge as “essential” personnel critical to maintaining the food supply. Their service has come at a steep cost: The United Food and Commercial Workers union says more than 100 grocery store workers have died of COVID-19 nationwide and at least 14,000 have been infected or exposed to the virus.

In addition to facing possible infection, workers have also had to play the role of social-distance enforcers. Asking customers to wear masks for everyone’s protection has led to arguments and even assaults at grocery stores.

Most workers were given modest pay bumps to compensate for the unusual hazards posed by the virus ― usually on the order of an extra $2 per hour ― but those premiums have long since disappeared at most chains even though the pandemic is ongoing.

I contracted COVID-19 at work and it wrecked me. I am still recovering. Jackie Mayoral, Ralphs employee

Employees at Ralphs and Food 4 Less are represented by UFCW Local 170. The union filed complaints against the stores with state regulators after workers began contracting the virus in the spring.

Jackie Mayoral, who works at a Ralphs store in Hollywood, was among those who got sick. She said in a statement through the union that she was glad her store got a citation.

“I contracted COVID-19 at work and it wrecked me. I am still recovering,” Mayoral said. “People are still getting sick and safety measures are still implemented inconsistently.”

Another Ralphs worker, Maria Hernandez, recently penned an op-ed for The Los Angeles Times, saying the company needs to listen more to workers to keep stores safe: ”I believe Kroger could slow the spread of the virus. I know my store inside and out. With support from the top, workers like me could help ensure safety protocols are being followed.”

‘Time To Act’ Podcast Ep. 5: Recognizing Your Own Bias In D&I Work