Despite recent spikes in coronavirus cases and hospitalizations across the country, South Dakota Gov. Kristi Noem (R) said Monday that the thousands of people planning to listen to President Donald Trump speak at Mount Rushmore this week will not be required to practice social distancing.

“We will have a large event on July 3,” Noem told conservative TV host Laura Ingraham. “We told those folks that have concerns that they can stay home, but those who want to come and join us, we’ll be giving out free face masks, if they choose to wear one. But we will not be social distancing.” 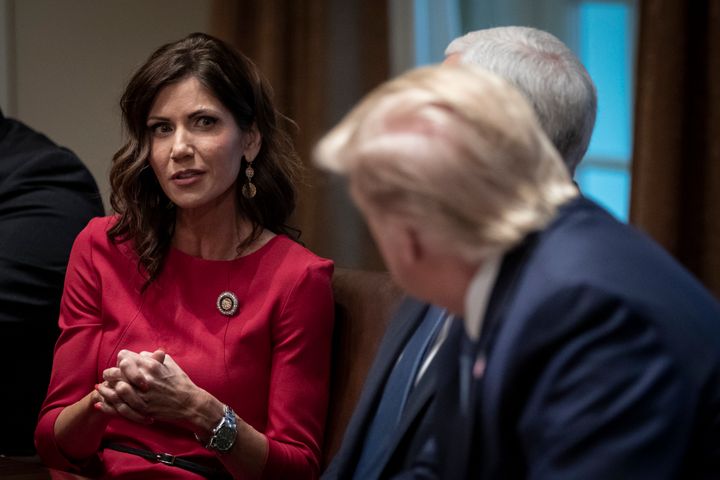 Drew Angerer/Getty Images South Dakota Gov. Kristi Noem (R) and President Donald Trump at a meeting in December. The president is planning to speak at Mount Rushmore this week, and Noem has said she will not require attendees to wear masks or practice social distancing.

Health officials across the country have advised that wearing a mask and practicing social distancing are imperative steps to take toward minimizing the spread of COVID-19, which is highly infectious and spreads most easily among people in close proximity.

Trump, who has led public opposition to health safety measures despite their widespread popularity, has refused to wear a mask in public.

The president is scheduled to deliver remarks in Keystone, South Dakota, the site of Mount Rushmore, for what has been billed as a celebration ahead of the Fourth of July. There have been over 6,700 confirmed coronavirus cases and 91 deaths in South Dakota, according to data from Johns Hopkins.

Aiming to paint a picture of normalcy amid a global catastrophe, Trump has continued hosting in-person campaign events during the pandemic in defiance of public health guidance from officials.

At least six members of Trump’s own campaign staff tested positive for coronavirus while preparing for an indoor rally in Oklahoma, where Trump spoke to thousands who refused to wear masks. Trump later held a similar event in Arizona, and hundreds packed into a church ― without donning masks ― to listen to him speak.

As infections and hospitalizations increase, even some Republicans often in lockstep with Trump have had to come to terms with the absurdity of his anti-mask stance.

Sen. Lamar Alexander, a Republican from Tennessee who will retire at the end of the year, on Sunday carefully embedded his criticism in praise for Trump.

“I wish the president would wear a mask when it’s appropriate because millions of Americans admire him, and they would follow his lead,” Alexander said.