UPDATE: Following the publication of this article, Facebook changed its policy on allowing presidential candidates to prematurely declare victory in state races. Posts making such claims will now be subject to labels noting that the votes are still being counted.

As President Donald Trump actively tries to undermine Tuesday’s election results, it has become clear that Facebook will allow presidential candidates to prematurely declare victory in any state without a disclaimer or removal — a key distinction the platform did not publicize when it rolled out several election-related initiatives earlier this fall.

The tech giant announced in September that posts from campaigns or candidates attempting to “declare victory before the final results are in” would be appended with context labels directing people to official polling results. But that rule only applies for posts claiming victory in the overall election — not individual states — The Wall Street Journal reported early Wednesday morning, revealing a loophole in the platform’s election integrity policy.

This discrepancy, which Facebook confirmed to HuffPost, opens the door for Trump to spread election misinformation on the world’s biggest social media platform in the midst of a critical and uncertain period. With neither Trump nor Democratic nominee Joe Biden yet projected to have 270 electoral votes, and with ballots still being counted in several swing states, any premature declaration by Trump that he won those individual states is tantamount to falsely claiming he won the entire election. But Facebook will not treat any such declarations that way. 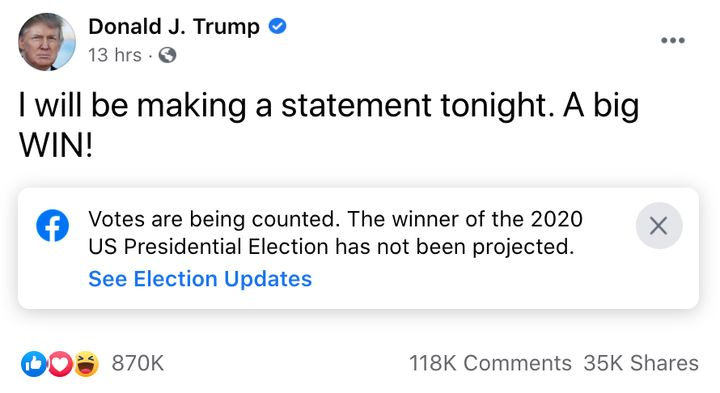 But if Trump prematurely or falsely claims victory in Pennsylvania, for example — a state that could determine the entire election — Facebook will not necessarily take any action, per its policy. A company spokesperson declined to answer why state races are exempted from the policy, which was enacted in early September purportedly to reduce the risk of civil unrest amid the fallout of Election Day.

At the time, Facebook CEO Mark Zuckerberg said, “I’m … worried that with our nation so divided and election results potentially taking days or even weeks to be finalized, there could be an increased risk of civil unrest across the country.”

Twitter, by contrast, has not only added labels to Trump’s deceptive election-related tweets — which explicitly describe them as potentially “misleading” or “disputed” — it has also restricted the tweets’ visibility and ability to be reposted.

Both companies spent months working to assure the public that they had strong plans in place to prevent the spread of false, misleading and unsubstantiated information about the election on their platforms. But Facebook in particular has stumbled from the start.

On the morning of Election Day, users of Facebook-owned Instagram reported that the app showed them a notification stating, “Tomorrow Is Election Day.” In a series of tweets, Instagram said that the notice, which ran on Monday, “was cached for a small group of people if their app hadn’t been restarted,” adding that the issue is “resolving itself as people restart.” It is unclear how many users were affected.

Chaos ensued even in the days immediately preceding the vote. In addition to its commitment to flag posts prematurely declaring electoral victory, Facebook also announced on Sept. 3 that it would stop accepting all new political ads during the week leading up to the election. The goal, Zuckerberg said, was to prevent political advertisers from spreading new messages to targeted audiences before fact-checkers and journalists had time to scrutinize them.

The ban was initially set to end after Election Day. But just hours after the news outlet Fast Company pointed out one of the policy’s glaring flaws — a candidate could still declare victory in an ad before the results are known — Facebook introduced a new rule prohibiting “political ads that claim victory before the results of the 2020 election have been declared,” and later extended the ban indefinitely.

Still, things did not go as planned.

Thousands of previously approved ads from Democratic nominee Joe Biden’s campaign and multiple progressive groups were wrongly blocked for days due to what Facebook later called a “technical flaw.” Trump’s campaign managed to launch new ads post-ban. And in violation of its own rules, Facebook approved ads from the president’s campaign prematurely declaring victory, as well as hundreds of ads bearing the misleading text “ELECTION DAY IS TODAY” or “Vote Today.”

“For more than a year, our campaign has engaged with Facebook in good faith to both better understand their shifting policies around elections and to push for equal and measurable enforcement of those rules,” Rob Flaherty, digital director of the Biden campaign, said at the time.

“It is currently unclear to us whether or not Facebook is giving Donald Trump an unfair electoral advantage in this particular instance, but it is abundantly clear that Facebook was wholly unprepared to handle this election despite having four years to prepare.”