Jenna Ellis, a senior legal adviser to Donald Trump, has been appearing on TV to staunchly defend the defeated president’s desperate attempts to steal the 2020 election.

But in a series of Facebook posts and radio interviews from 2015 and early 2016 that CNN’s “KFile” unearthed this week, the lawyer described Trump as an “idiot” and a “bully” who “cannot handle criticism.” 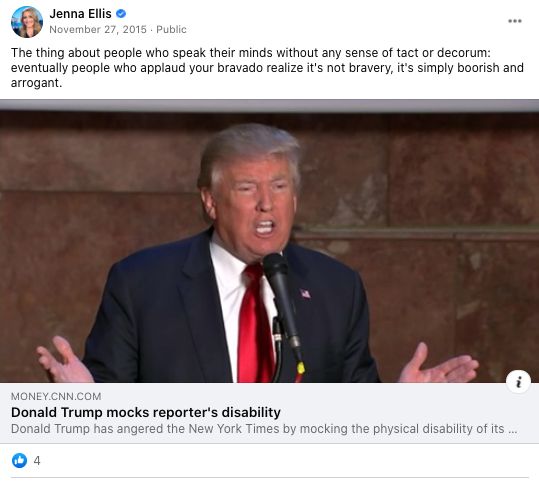 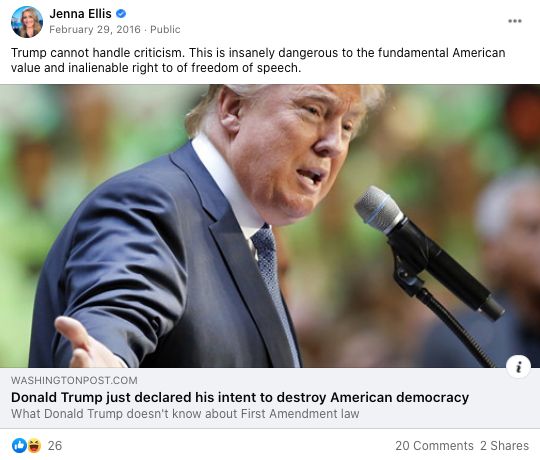 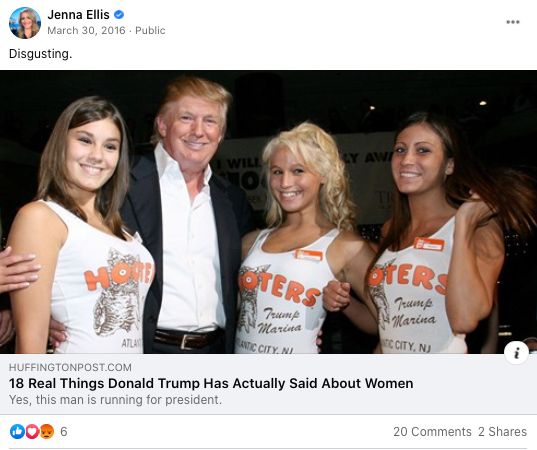 Ellis changed her tune and supported Trump in the 2016 election.

She acknowledged her previous antipathy to the president in a statement to CNN.

“I am glad to have learned that I was completely wrong about Trump back then and I’ve said that over and over publicly, as I saw him keeping his promises, and then eventually getting to know him personally,” she said.

“I appreciate KFILE showing clearly through past statements that I think for myself, and that my mind was changed based on fact and personal knowledge,” Ellis added. “President Trump is a sincere Christian, the best president in modern history, and made and kept his promises to the American people. I am proud to stand with him and his goals for the future of this country and all of its citizens.”

Ellis is not the first Trump acolyte forced to justify their flip-flopping.

Kayleigh McEnany in 2015 dismissed Trump as a “showman.” After his election, she became an ardent defender, landing herself the role of White House press secretary. McEnany also had some compliments for Joe Biden back in the day.

Which Airlines Are Blocking Middle Seats During Holiday Travel?

What We Know About Missing Arizona Geologist Daniel Robinson