A whipping post that had long stood outside the Old Sussex County Courthouse in Georgetown, Delaware, was finally removed Wednesday.

The post was taken to a storage facility by Delaware’s Division of Historical and Cultural Affairs (HCA), which indicated in a press release that the apparatus for corporal punishment was a remnant of the state’s past, which saw whipping “disproportionately applied to persons of color,” with “those sentenced to the whipping post … lashed up to 40 times for a single offense.”

Delaware.gov The whipping post had remained outside the Old Sussex County Courthouse in Georgetown, Delaware.

“It is appropriate for an item like this to be preserved in the state’s collections, so that future generations may view it and attempt to understand the full context of its historical significance,” HCA Director Tim Slavin said. “It’s quite another thing to allow a whipping post to remain in place along a busy public street ― a cold, deadpan display that does not adequately account for the traumatic legacy it represents and that still reverberates among communities of color in our state.”

Excavating the post took about an hour and a half, and its removal was greeted by cheers from crowds, as seen in footage captured by reporters for Delaware Online.

The whipping post is no longer standing #netde pic.twitter.com/yzbbUVqFxM

According to Delaware’s Public Archives, the whipping post became an official punishment in Delaware in 1717 and was not removed from the state’s code of law until 1972, though the last time a post was actually used was in 1952. Three of the posts were originally erected in Delaware’s counties of New Castle, Kent and Sussex.

The posts, which were painted red and colloquially called “Red Hannah,” became the subject of a 1947 sociology book by Robert Graham Caldwell, “Red Hannah: Delaware’s Whipping Post.” Caldwell found that more than 1,600 people had been whipped from 1900 to 1942, of which “66.2 percent were negroes.” 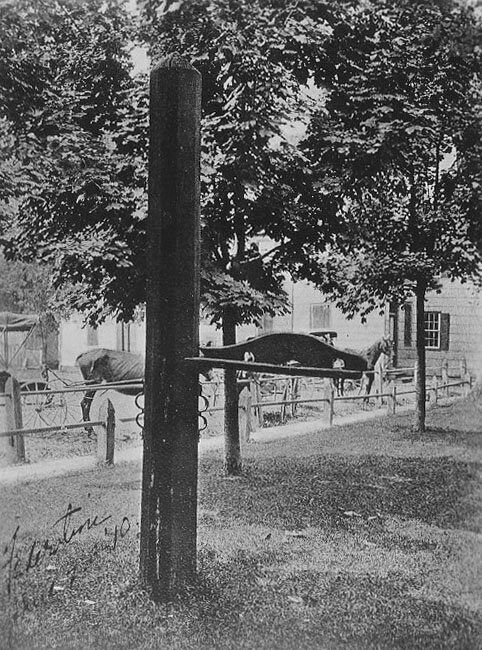 Delware.gov An image of the whipping post from Delaware’s Public Archives.

Reba Hollingsworth, vice chair of the Delaware Heritage Commission, recalled as a child in the 1930s seeing a man whipped by a “cat-o-nine-tails that had a short handle with nine rawhide thongs.”

“Finally, Delaware is removing its last ‘Red Hannah,’ the whipping post, from the public’s view,” she said in the official statement. “Such relics of the past should be placed in museums to be preserved and protected for those who want to remember the cruel, inhuman, barbarous acts perpetrated on our citizens.”

Black And Asian Americans Have Experienced More Racism Due To COVID-19: New Survey