Family, friends and community members are mourning the death of a teen fatally shot by Los Angeles County sheriff’s deputies after he ran away from them on Thursday evening.

Deputies killed Andres Guardado, 18, at around 6 p.m. near a strip of businesses in Gardena, California, The Los Angeles Times reports.

Guardado was working two jobs and was a student at Los Angeles Trade-Technical College with ambitions to become a registered nurse, according to CBS Los Angeles. 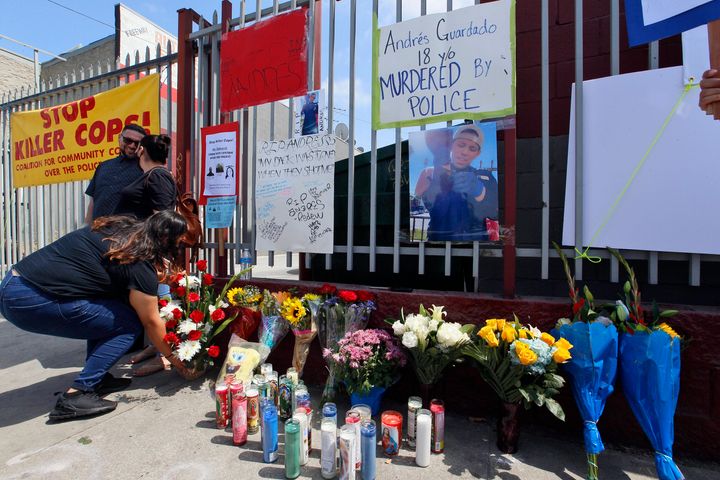 AP Photo/Damian Dovarganes Friends leave candles and flowers at a makeshift memorial for Andres Guardado on Friday in Gardena, California, near where he was fatally shot by a Los Angeles County sheriff’s deputy.

Andrew Haney, a mechanic and manager of an auto body shop near where Guardado was killed, told The Associated Press that the teen was a regular who would often visit the shop after working a shift as a security guard. He wasn’t formally employed by the shop as a security guard, but would often help watch out for people who might vandalize the cars.

“He was there more because of the friendship and to learn [about cars],” Haney told the Southern California News Group﻿, adding that Guardado “felt the right thing to do was to keep an eye out in the front and if he saw someone tagging, he would stop them.”

Guardado was in front of the shop when police approached on Thursday evening.

“And then the police came up, and they pulled their guns on him and he ran because he was scared, and they shot and killed him,” Haney told CBS Los Angeles. “He’s got a clean background and everything. There’s no reason.”

AP Photo/Damian Dovarganes Candles and flowers are set next to an image of Andres Guardado.

The sheriff’s department said in a statement that deputies shot Guardado after he “looked toward the deputies and produced a firearm” and then “proceeded to run” away from them. The statement refers to Guardado as a “suspect,” though it does not say what he was suspected of.

“A short foot pursuit ensued and at the conclusion, the deputies contacted the suspect and a deputy involved shooting occurred,” the statement says.

Guardado was shot in the “upper torso” and died at the scene, according to the statement.

In a follow-up statement, the department said Guardado wasn’t wearing a uniform or clothing identifying him as a security guard. It also said deputies found a gun with no “identifying marks or serial numbers” that contained a “loaded large capacity prohibited magazine.”

Detectives with the department are investigating the incident.

Georgena Laird, a neighbor of the auto shop, said she saw two deputies pointing guns at Guardado. She didn’t witness the shooting itself, but said she heard multiple gunshots. Laird described Guardado as a “sweetheart” who would often check on her and offer her help when her husband was recently in the hospital.

Photos from the area where Guardado was shot show signs, flowers and candles left to honor his memory. Some signs included messages like “Murdered By Police” and “My Back Was Turned When They Shot Me.”

Dozens of protesters rallied on Friday night, demanding answers about what happened on Thursday night.

Guardado’s uncle, Noe Abarca, told the Times that the family wants “justice” for their loved one.

“We want to know why they killed him,” he said.