“Public confidence in our law enforcement process is incredibly important now more than ever,” Polis wrote on Twitter. “A fair and objective process free from real or perceived bias for investigating officer-involved killings is critical.”

He continued: “I am hearing from many Coloradans who have expressed concerns with the investigation of Elijah McClain’s death. As a result, I have instructed my legal council to examine what the state can do and we are assessing next steps.”

Public confidence in our law enforcement process is incredibly important now more than ever. A fair and objective process free from real or perceived bias for investigating officer-involved killings is critical. (1/2)

McClain, 23, was stopped by police in Aurora in August as he was walking home from a convenience store. Someone called 911 to report him as suspicious because he was wearing a ski mask, police said.

Police said they tried to stop him, but he resisted, so three white officers tackled him and one put him in a chokehold. Paramedics called to the scene injected him with ketamine to sedate him.

McClain went into cardiac arrest on the way to the hospital and died days later, after he was declared brain dead. He was never accused of a crime.

The officers were cleared of wrongdoing in February by a review board.

A Change.org petition calling for the case to be reexamined has garnered more than 2.5 million signatures as McClain’s name gained international attention amid rising calls to address systemic racism and police brutality.

“Sign this petition to bring justice for Elijah,” the petition reads. “Demand these officers are taken off duty, and that a more in-depth investigation is held.”

McClain’s family has called for an independent investigation into the officers’ conduct, claiming they used excessive force that resulted in McClain’s death.

“I’m surprised how long it has taken for the world to take notice of this case,” Mari Newman, an attorney for his family, told CBS Denver. “It is very disappointing that it took the murder of somebody across the country for people here in Colorado to finally take notice. But, it is happening.” 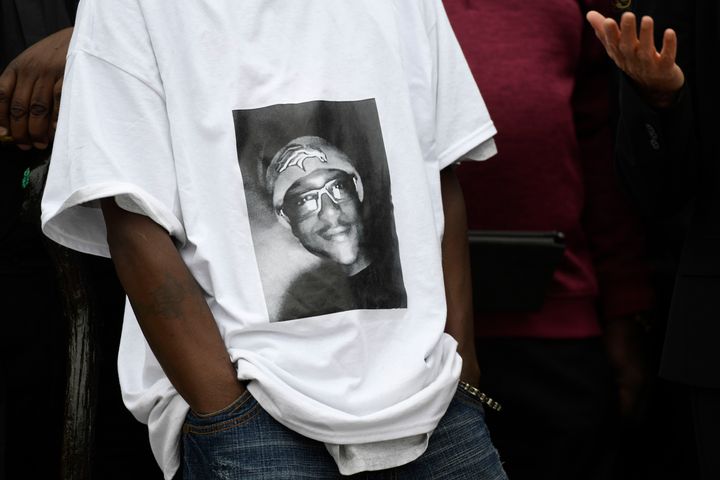 Andy Cross via Getty Images LaWayne Mosley, father of Elijah McClain, wears a T-shirt with is son’s picture on it during a press conference in front of the Aurora Municipal Center Oct. 1, 2019.

The governor’s authority to review the conduct of local police is unclear. The Denver Post notes Polis can’t directly intervene, but could ask the state attorney general to do so.

Aurora Mayor Mike Coffman said he would ask the city council to vote for an independent investigator to look into McClain’s death, saying it was: “imperative we quickly and urgently move forward with this investigation so we can provide answers to our community.”