The Treasury Department is emerging as a high-priority for climate progressives seeking to influence a Joe Biden administration, should he win the 2020 election.

It’s not hard to see why advocates are looking beyond who would run the Environmental Protection Agency under a President Biden. Transitioning the global economy away from fossil fuels at the speed needed to keep warming in a relatively safe range requires unprecedented changes to the flows of private and public capital. Forecasters have long warned that warming-fueled disasters and risky bets on fossil fuels’ long-term use could crash the economy.

Shifts are already underway in the insurance sector. Banks and financiers, facing mounting pressure from activists and record numbers of billion-dollar climate disasters, also are starting to take the risk seriously. Advocates hope the defeat of President Donald Trump, who rejects the reality and seriousness of climate change, could pave the way to potentially reverse his administration’s wanton handouts to fossil fuel companies and reform the financial system before climate change sparks another chaotic market crash.

“There is a real recognition that climate risk is a structural risk for the U.S. economy and the global economy, and you can’t escape that,” said Bracken Hendricks, a climate policy expert and former senior adviser to Washington Gov. Jay Inslee’s climate-focused bid for the Democratic nomination last year. “The West Coast is on fire, you’ve got a hurricane hitting New Orleans. These are real economic impacts on real businesses.”

Warren, whose years of stumping for financial reform fueled her rise as one of Biden’s foremost primary rivals, ran for president on a sweeping climate platform that included new Wall Street regulations to curb polluting investments and require increased disclosure of risky fossil fuel bets.

But taking her out of the Senate would allow Massachusetts’ Republican Gov. Charlie Baker to fill her spot, at least until a special election could take place (which Bay State law requires within 145 to 160 days for such a vacancy). Choosing her would be seen as fiercely antagonistic to Wall Street, a position Biden seems reluctant to take.

Raskin, 59, captured the climate world’s attention in March when she testified before the House Select Committee on the Climate Crisis and outlined what many see as potential first steps she’d take to address global warming if selected as the nation’s top financial regulator.

CNBC via Getty Images Sarah Bloom Raskin, now a fellow at Duke University in North Carolina, is being floated as a possible pick for the Treasury secretary if Joe Biden wins the presidency.

She called for rules requiring investors to disclose the risk climate change poses to assets and said regulators should begin carrying out climate stress tests like those implemented by the Bank of England and the European Central Bank to assess how different disasters could destabilize financial institutions. In May, she criticized the Federal Reserve for propping up fossil fuel companies amid the coronavirus pandemic in a New York Times op-ed that called for public investments to “build toward a stronger economy with more jobs in innovative industries — not prop up and enrich dying ones.”

Raskin declined an interview request. But her approach made her an apparent favorite of the Democratic Party’s progressive wing, which ― having seen the presidential nomination go to a  centrist standard-bearer ― aims to stack a Biden administration with Cabinet officials willing to challenge corporate power and take aggressive steps to slash emissions.

“We’d definitely support her,” Evan Weber, the political director of the Sunrise Movement, said of Raskin. “To the extent that Warren is an option, we’d support that, too.”

The Biden campaign, which has sought to tamp down speculation about appointments ahead of the election, did not respond to a request for comment.

The Treasury Is Kind of A Big Deal

Much of the insurgent climate movement that emerged over the past few years grew out of campus-led efforts demanding financial institutions ― often university endowments ― divest of fossil fuel holdings. By the start of the Trump administration, those calls went mainstream, with governments as big as New York City vowing to start the process of pulling its $5 billion pension funds out of the oil, gas and coal business. Over the past year, that movement ramped up into a new campaign to pressure on banks and big investors to severely limit investments in new fossil fuel infrastructure.

The effort has managed to score some early victories. In January, BlackRock, the world’s largest asset manager, wrote in its annual letter to CEOs that it would be “increasingly disposed to vote against management and board directors when companies are not making sufficient progress on sustainability-related disclosures.” In July, Citigroup vowed to start measuring companies by their compatibility with the warming scenario outlined in the Paris climate accords. JPMorgan Chase made a similar commitment earlier this month.

That lays the groundwork for significant changes at the Treasury. The Trump administration had disbanded the department’s Office of Environment and Energy and backtracked on efforts to limit financing for new coal projects. Last January, Treasury Secretary Steven Mnuchin clashed with European Central Bank head Christine Lagarde over whether it was worth it to even try to predict the risks climate change posed to the financial sector.

Increasing investments in research and building new, complex models should be a top priority for a Biden Treasury, according to a blog post this month by researchers at the Center for Economic and Policy Research’s Revolving Door Project, which also called for implementing climate stress tests as a critical first step. 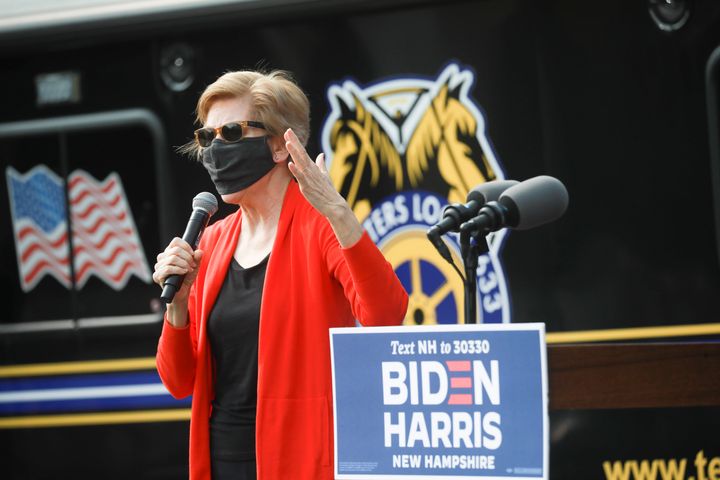 A climate-focused Treasury secretary could lean heavily on the 2010 Dodd-Frank law that overhauled financial regulation in the wake of the Great Recession. The Financial Stability Oversight Council, established under the law to rally other financial regulators and synchronize rule changes to protect against the domino-effect of a market crash, could become a key venue to analyze the potential economic upheaval of climate change and create safeguards requiring investors and insurance companies to integrate that risk into their portfolios.

Taxing carbon dioxide emissions has become controversial, with economists and oil companies on one side saying it’s the most efficient way to reduce pollution and advocates and some policy experts on the other warning it would be politically unpopular and distract from more urgent government action required to keep warming within a safe range. But if the Biden administration priced carbon at some level, that policy would largely fall under the purview of the Treasury, Stanley said.

The department could also, as the largest shareholder of the World Bank, pressure the institution to veer away from fossil fuels, a sector in which it has invested $12 billion since the 2015 Paris climate agreement was struck, according to estimates the German environmental group Urgewald released this month. Doing so could be part of a broader international mandate on climate. A report published Tuesday by the Democratic climate policy group Evergreen Action, which Raskin advised, called for the U.S. to join the Network on Greening the Financial System, a 69-member coalition of central banks, as part of an effort to “prevent a climate crash.”

“Almost everything Treasury does carries enormous climate implications,” said Jeff Hauser, the Revolving Door Project’s executive director and co-author of the blog post. “Sarah Bloom Raskin gets that. You need somebody like Sarah Bloom Raskin in that job.” 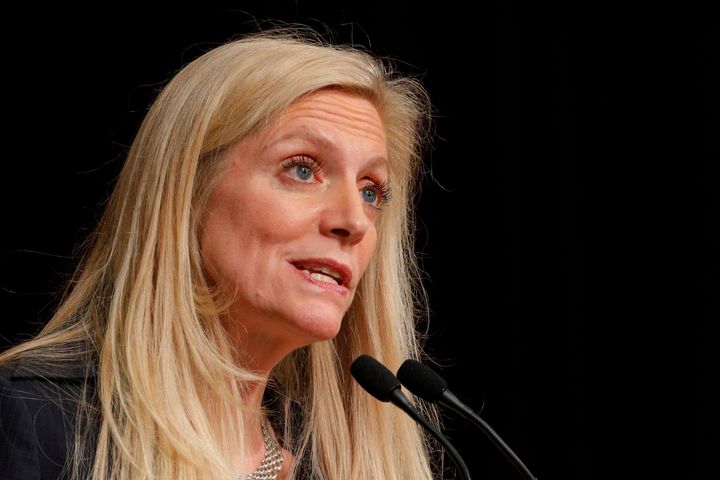 Brian Snyder / Reuters Federal Reserve Board Governor Lael Brainard is being touted in the financial press as a top contender for Biden’s Treasury secretary.

Another name touted in stories on Bloomberg and CNBC as a top contender is Lael Brainard, a governor at the Federal Reserve and former undersecretary at the Treasury during Obama’s first term.

Unlike Raskin or Warren, Brainard has been relatively quiet on climate. Last November, she gave a speech calling for the Fed “to study the implications of climate change for the economy and the financial system and to adapt our work accordingly.” But, in April, she voted in favor of allowing the Fed’s Main Street Lending Program to expand its criteria and make it easier to provide loans to fossil fuel companies struggling as oil prices plummeted this year.

Moreover, Hauser said, Brainard carries political risks for Biden. She struggled to rein in Chinese currency manipulation during the Obama administration, opening the door to a soft-on-China critique from Republicans, and did little to halt corporate mergers that allowed companies to evade taxes by moving their headquarters overseas.

Plus, Hauser noted, her husband is Kurt Campbell, the chairman and chief executive of the Asia Group, a multinational investor consultancy.

“That’s a huge conflict of interest,” Hauser said. “He could divest, but I don’t know if he would do what he’d need to do.”

Rather than run the Treasury, Brainard’s record of pushing liberal monetary policy that focuses on the risk of unemployment rather than inflation could make her a strong candidate for Fed chair.

“Since unemployment rates over the past decade have been very real and the inflation fears have been fictitious, that’s a very real achievement,” Hauser said. “A lot of people have jobs today because of [her] leadership.”

Brainard declined HuffPost’s request for comment, and Campbell did not respond to HuffPost’s questions about whether he’d divest of Asia Group if his wife was nominated to a Cabinet post.

Hendricks, who has not taken a position on any potential nominees, said the Treasury job isn’t just about averting a climate-fueled financial disaster.

“The Treasury secretary straddles both the management of the dangers of systemic risk and also the opportunity to activate positive job creation,” he said. “This is an incredibly important position.”