The Associated Press declared McGrath the winner on Tuesday, a week after voters cast their ballots on June 23 in a primary election delayed and altered by the coronavirus pandemic. McGrath led Booker by roughly 7,000 votes ― 44.9% to 43.5% ― with more than 90% of ballots counted when the race was called. Mike Broihier, a retired Marine and farmer who waged his own progressive campaign, finished a distant third, with about 5% of the vote.

McGrath claimed victory in an email to supporters Tuesday afternoon, saying she was “humbled to be your nominee” against McConnell and that she “can’t wait to get started in sending him into retirement.”

McGrath’s victory is the latest in a string of wins for Democratic establishment leaders, whose preferred candidates have repeatedly held off progressive insurgents like Booker in the 2020 election cycle. But the results also demonstrate the first major challenge facing McGrath in November: She lost Kentucky’s two largest counties and will need to reenergize voters who preferred Booker in both locations to have any shot at ousting McConnell this fall.

McGrath will enter the general election armed with a massive campaign war chest after raising more than $40 million during the primary. Her robust fundraising ability has helped fuel hopes among Democrats that McGrath can mount an aggressive bid to unseat the six-term Republican senator who has long been the bane of Democrats and is now an even bigger target as one of President Donald Trump’s chief Washington allies.

The primary victory gives McGrath a second chance to win a seat in Congress after she narrowly lost the race for a central Kentucky House seat to GOP Rep. Andy Barr in 2018.

McGrath emerged as a prominent and promising new face in Kentucky politics during that earlier Democratic primary. Her long-shot bid for a House seat focused heavily on her experience in the Marines and her status as an outsider.

This time, she had to hold off her own insurgent challenger. Booker, a freshman state legislator from Louisville, emerged as a real contender in the primary after taking a leading role in racial justice protests that broke out in his hometown and across Kentucky. Those demonstrations highlighted the March police killing of Breonna Taylor, a Black woman in Louisville.

Booker, who became Kentucky’s youngest Black state lawmaker elected in nearly a century in 2018, ran on a slate of progressive proposals that included the Green New Deal and “Medicare for All.” He broke into the national conversation amid the protests, receiving numerous endorsements from state lawmakers and national progressive leaders ― including Sens. Bernie Sanders (I-Vt.) and Elizabeth Warren (D-Mass.) and Reps. Alexandria Ocasio-Cortez (D-N.Y.) and Ayanna Pressley (D-Mass.). Kentucky’s two largest newspapers also endorsed Booker in the contest’s closing stages.

“Like so many Kentuckians, I was and am inspired by the powerful movement Charles Booker built toward the causes of defeating Mitch McConnell and fighting systemic racism and injustice in our country,” McGrath said in the email to supporters. “He tapped into and amplified the energy and anger of so many who are fed up with the status quo and are rightfully demanding long-overdue action and accountability from our government and institutions.”

The Kentucky primary was originally scheduled to take place on May 19 but was delayed for more than a month over concerns about COVID-19. After Kentucky Gov. Andy Beshear (D) and Secretary of State Michael Adams (R) reached a bipartisan agreement to expand absentee voting with no-excuse mail-in ballots and to allow a week of early voting, the election drew record turnout for a Kentucky primary. Total votes surpassed the number cast in 2008, when Hillary Clinton and Barack Obama dueled for the Democratic presidential nomination.

Although there were concerns about voter suppression due to most counties’ decision to limit in-person voting to a single location, the expansion of mail-in voting proved largely successful. Some voters, however, faced delays in receiving their ballots and there were notably long lines at the polls in Lexington, pointing to issues that Kentucky needs to address before November’s election.

Booker’s late surge in the race pushed him to the lead among Kentuckians who cast ballots in person on Election Day. He won those voters by 65 percentage points in Louisville and 50 points in Lexington, the state’s two largest cities. But McGrath’s advantage with mail-in votes, which made up roughly three-quarters of the ballots cast in the race, earned her the victory. Booker’s final margin of victory in Lexington, for example, shrank to roughly 6 percentage points, and absentee ballots swung many of Kentucky’s rural counties sharply in McGrath’s favor. 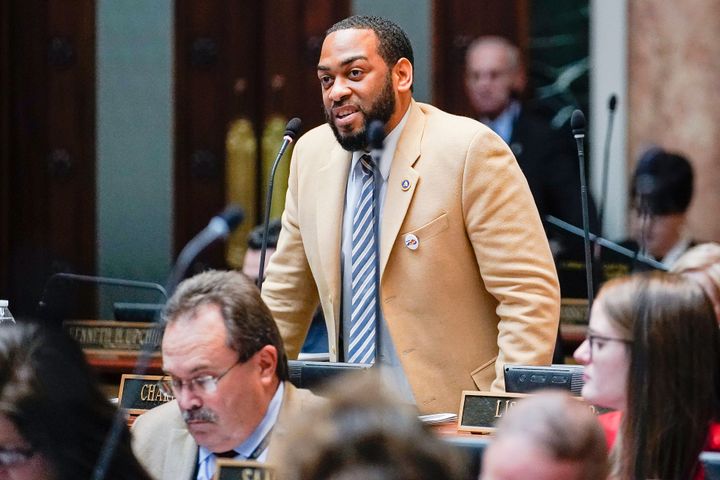 McGrath’s entry into the race against McConnell last July generated an immediate wave of national interest in Kentucky’s Senate race. She smashed Kentucky fundraising records and sparked visions of a potential Democratic victory over the Senate leader, who ranks, by some measures, among the least popular lawmakers in the country.

Again, she leaned on her military experience and her outsider status. But early missteps ― including a waffling position on whether she would have supported Justice Brett Kavanaugh’s nomination to the Supreme Court ― caused some angst among Democrats about her candidacy and helped create the atmosphere in which Booker’s progressive campaign later thrived.

Over the race’s final days, Booker hit McGrath for being a “pro-Trump Democrat,” an allegation based on an earlier comment in which she’d blamed McConnell for standing in the way of parts of Trump’s agenda, and for choosing not to attend protests over Taylor’s killing.

McGrath, who supports an Obamacare expansion to include a public option, legislation to lower the price of prescription drugs and federal infrastructure investments, particularly in Kentucky’s rural areas, came out late in the race to back existing Senate legislation to reform police. She also touted her Democratic bona fides in a late advertising push.

In the end, McGrath won handily in many of Kentucky’s rural counties, as well as in some suburban areas.

But the enthusiasm around Booker may have dampened support for her among progressive voters, who’ve long wanted to see a candidate like him take on McConnell, and among Black voters, who form a small but potentially powerful bloc of support for Democratic candidates in Kentucky’s biggest cities. Booker’s victories in Louisville and Lexington, as well as his better-than-expected performance in some key rural and suburban counties, show where McGrath needs to make up ground in the general election.

To beat McConnell in November, McGrath must rack up huge margins in Jefferson and Fayette counties, where Louisville and Lexington, respectively, are home to the state’s largest bases of reliable Democratic voters. Booker also won Warren County, a western Kentucky area that has begun to trend toward Democrats.

But McGrath outpaced her progressive challenger in two other suburban northern Kentucky counties that are also vital in November, and she will be buoyed by the national Democratic interest in knocking off McConnell and wresting away his control of the Senate, which should help her continue to raise staggering amounts of cash. She exited the primary with nearly $20 million left, and McGrath can point to polls to bolster hopes that she has a chance to pull off the upset. In the closing days of the primary, her campaign touted a May poll showing her running dead even with McConnell, although national observers still rate McConnell as the favorite to win re-election.

This story has been updated with comments from Amy McGrath.