The California National Guard is investigating a member’s possible ties to the Proud Boys, a neo-fascist group, after he posted a photo of himself standing next to a military vehicle inscribed with one of the group’s slogans while patrolling anti-racist protests in Los Angeles last month.

Anonymous anti-fascist activists shared the photo with HuffPost, which Sgt. Brian Jackson posted on Facebook last month. After HuffPost inquired about the image, a spokesperson for the California National Guard confirmed on Wednesday that Jackson, a motor transport operator from Bakersfield, California, is now under investigation for ties to the extremist group.

“We have initiated an investigation and will take appropriate action in accordance with regulations,” Lt. Col. Jonathan Shiroma said in a statement. “Any form of hate speech and extremist behavior is not tolerated, and has no place in the California National Guard.”

Jackson was among the roughly 1,000 armed California National Guard troops sent to Los Angeles County in early June to quell the uprising against police brutality, one of many such demonstrations that have swept the country in response to a series of high-profile killings of Black Americans at the hands of law enforcement.

“Hopefully a quiet night in Canoga Park,” read the caption Jackson posted with the photo on June 2, referring to the Los Angeles neighborhood.

The message inscribed on the vehicle, “POYB 2020,” is an acronym for “Proud Of Your Boy,” a Proud Boys slogan derived from a song in Disney’s ”Aladdin.”

Some of Jackson’s Facebook friends wrote “POYB” and “Uhuru” — a common Proud Boys chant — in the comments below his photo. 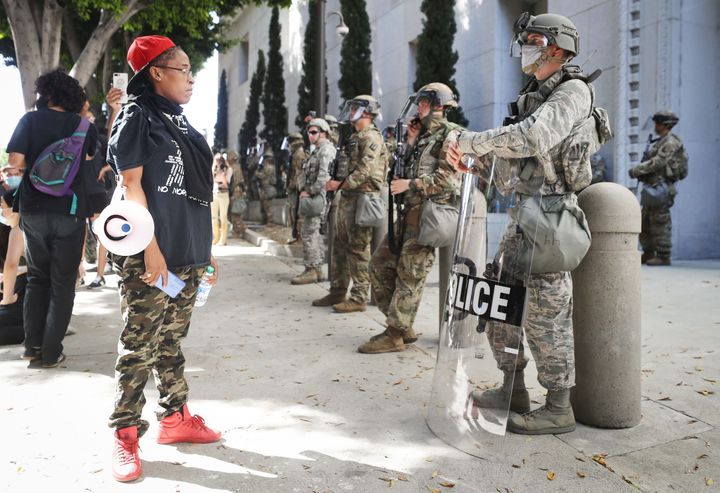 Mario Tama via Getty Images A protester looks at National Guard troops posted in Los Angeles on June 3. Jackson was among their ranks.

The Southern Poverty Law Center lists the Proud Boys as a hate group. Its members are explicitly anti-feminist, anti-Muslim and anti-immigrant. While the group publicly claims to reject the so-called alt-right and says it allows Black and brown members, its ranks have included many white nationalists and its founder, Gavin McInnes, is deeply racist.

Proud Boys are perhaps best known for violently attacking leftist protesters in the streets, attacks that they discuss and plot in private chat rooms. McInnes once said members could become a high-ranking, or “fourth degree,” Proud Boy if they “kick the crap out of an antifa.”

Jackson did not respond to a request for comment sent via Facebook on Wednesday, and soon after HuffPost sent the message, he deleted multiple racist posts and other evidence related to the Proud Boys from his Facebook page.

“Serious question: what is ‘Black culture?’” Jackson wrote in one post that has since been deleted.

“As far as culture is concerned,” he wrote in a subsequent comment on that post, “why is America so obsessed with endorsing something that seems contrary to polite society and our American values (drugs, weak family structures, criminality, glorification of violence, subjugation of their own people to low expectations and political slavery)?”

Another since-deleted post featured an advertisement for an April 25 Proud Boys rally against coronavirus lockdown measures.

Jackson appeared to have attended that April 25 rally, and posted a Facebook Live video from the event. The footage includes a man in the Proud Boy uniform — a black-and-yellow Fred Perry polo shirt — near Jackson.

After HuffPost contacted Jackson this week, he replaced his Facebook profile photo — a graphic with the words “ZERO WHITE GUILT” — with an image of the comedian Will Ferrell. (Proud Boys often describe themselves as “anti-white guilt.”)

Jackson’s current Facebook banner image shows him and other national guardsmen posing with members of the Los Angeles Police Department during the protests last month.

The Jackson incident comes amid heightened concern about white supremacists and other extremists within law enforcement and the military, especially as those institutions have been deployed to suppress anti-racist protests. In many cities, law enforcement has used violent tactics against protests, including tear gas, rubber bullets and pepper spray.

Last month, Right Wing Watch reported that a member of the Ohio National Guard, who had been sent to Washington, D.C., to police protests there, was a white supremacist YouTuber. “They activated my unit and we’re getting real ammunition to shoot and kill,” the Ohio guardsman, Shandon Simpson, allegedly wrote on the social media platform Telegram ahead of his deployment.

“Rahowa,” Simpson added, using the popular fascist shorthand for “racial holy war.” The FBI later said Simpson had been removed from the protests in D.C. and sent home. Simpson has since said he was discharged from the Ohio National Guard.

Vice News also reported that at least one member of a private chat group for so-called Boogaloo Bois — a far-right movement hoping to hasten a violent civil war in the U.S. — claimed to be a Pennsylvania National Guardsman getting ready to deploy to protests in Philadelphia.

And in Wilmington, North Carolina, last month, three white police officers — who haven’t been connected to any extremist groups — were fired after they were caught on a patrol car camera using racial slurs while discussing murdering Black protesters.

“We are just going to go out and start slaughtering them fucking niggers,” one officer said.

“Wipe ’em off the fucking map,” the same officer said of Black Americans. “That’ll put ’em back about four or five generations.”